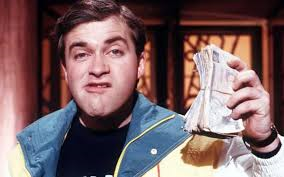 Lord Harris of Peckham
It would appear that Lord Harris of Peckham is morphing in to Peter Hill-Wood. The only explanation that can be given for his big reveal of Arsenal's financial position is that he had himself a few too many glasses of a good scotch and got a bit loose-tongued in close proximity to a journalist. I can see no other reason for an Arsenal director to go giving interviews that tell everyone we're stinking rich to the tune of £200m in loose change available for new players. He also made it clear that Arsene Wenger is interested in signing a top centre-forward. Lord Harris, though, is not stupid and didn't reveal who the mystery man is. Shrewd man.
The problem Arsenal now have is that all of Europe knows we have a lot of money to spend. That being the case you can probably add about £10m to the asking price for any top talent we might be trying to bring in. I imagine Ivan Gazidis and Dick Law might not be too impressed with Lord Harris right now as he has just made their jobs a whole lot more difficult. We all know that Arsenal have plenty of money available, but I'm not sure many would have known there was as much as £200m in the bank. Imagine having to now negotiate with a selling club who will know they can maximise their profit by sitting tight on their player.
With two weeks to go until the season starts I am disappointed at the lack of transfer action within the Club. A few have gone out, and a few more will join them. However, the only incoming player has been Petr Cech. Obviously Cech is a first-rate addition to a position that we needed to add more quality to. It seems that, if we are going to add more players, the lessons of previous years have not been learned. I don't understand why the necessary business is not done early, giving new players the chance to settle in and gel with their new team. If we get to the start of the season without any more new signings then we are actually shorter than we were last season. The price of dropping cheap points in the first few games could come back to haunt us come May. I wouldn't say I'm in to panic mode about our lack of transfer business just yet, but I'm certainly worried by it.
Of course it's Emirates Cup time this weekend and I am very much looking forward to going to Arsenal tomorrow afternoon for the Lyon game. I'm taking the whole family so my youngest will be seeing his second Arsenal match, though he's more interested in meeting Gunnersaurus again. Hopefully Cazorla will be in the side tomorrow as that will grab his interest. I'll be writing something on the Lyon game very late tomorrow night so you'll probably catch it Sunday morning via the site here, my Twitter feed (@ARSENALDvbrisG) or on the Facebook page (It's MY Arsenal Opinion).