Jack leads the pack back 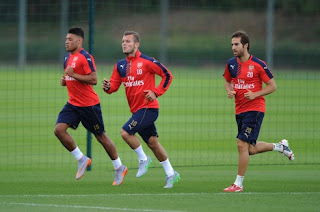 The boys are back!
So pre-season training has officially begun. Some players were back yesterday, as Jack Wilshere proved with a photo on his Instagram feed, but today appears to have been the formal start of the preparations for 2015-16.
The presence of Jack Wilshere at training this week is surely a mark of his commitment. Having been involved in the England squad he has had hardly any time for holidays and rest and it is surely to his credit that he is so determined to get fitter quickly. Of course Jack spent a lot of the actual season last year out injured so maybe a rest from the physical demands is less needed. Whatever the case may be it is simply just good news that Jack Wilshere is fit to begin pre-season and will hopefully stay that way for a long time to come.
A notable absentee from the training today is Mikel Arteta. It seems from reports that he has been handed a new contract and I think that's only right as Arsenal Captain. Arteta has sacrificed his natural game to play for Arsenal and become the leader of this squad. Clearly he is now behind Coquelin in terms of being the first-choice to anchor the midfield, but his presence is important. I've seen many today taking it is proof that Arsenal will not sign a midfield player to challenge (or assist) Coquelin's position but it's early days to be going there just yet. It might be that Arsene will bring in someone and Arteta will become the "Flamini" of the squad this year with the Flamster himself perhaps moving on. I'm not going to panic just yet about our transfer business. What does concern me is that Arteta might well be injured again, assuming he had ever actually recovered at the end of last season, and if he is then we have a problem before we've even got started.
Among the youngsters included with the first-team group today were regulars Isaac Hayden, Gedion Zelalem and Chuba Akpom, but they were joined by Wellington Silva and Daniel Crowley. I will assume that Kristian Bielik is not yet back in training. The presence of Wellington and Crowley perhaps gives an early idea as to who might be boarding the plane to Singapore for next weeks Asia Trophy. It's time for Zelalem and the others to really make their presence felt in the way Cesc Fabregas did many years ago - it's probably now or never for Isaac Hayden, for example.
There have been a couple of moves in terms of squad numbers so far as well, confirmed by updated pages on the official website. Hayden and Akpom have new numbers, and so does Hector Bellerin who inherits the number 24 from Abou Diaby (given that Mathieu Debuchy found himself as injured as Diaby having taken over the number 2 shirt we have to hope Abou hasn't left a curse here!) I feel sorry for anyone who might have had their new shirts printed with the popular Bellerin's number 39 already. Of course we still have no number for Petr Cech and I don't expect one until one of the other goalkeepers moves on.
Arsenal, like every other club, tell us how important pre-season training is. Fitness work is crucial apparently. In the old days I'm sure this was true as there was a proper break between seasons and most players would have gone on the beers etc with little further thought to football until it came time to return to work. However, we now have around five weeks or so between the end of one season and the return to training for the next. Each player is given a programme to follow while they're away and you can be sure most of them at the top clubs would stick to it pretty closely. I really don't see that they would be so out of shape as for the whole pre-season "programme" to be so important. You might think I'm talking absolute nonsense. I am, after all, a supporter and not a sports scientist or a footballer. However, let's remember that players get injured during the season and might be out for at least a month. When they come back to they don't go through a pre-season schedule. They don't play four or five friendlies. They might take part in the odd under-21 game, or behind closed doors match, but then will be either in the first-team or on the bench. What's the difference between four weeks off in June and four weeks off in November? I just don't get it. Arsene regularly talks about "match fitness" but it's a very selective criteria where he is concerned and gives a lie to the importance he places on the five weeks that lie ahead of us now.
With many of the players back in training we are starting to gear up now for 2015-16. They all jet off to Singapore soon for the Asia Trophy which is played next week (I think it's live on Sky) so we'll finally get some Arsenal to enjoy. I'm looking forward to it.