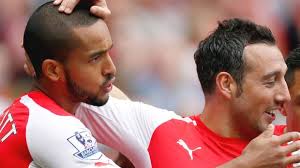 Good news all round
In a week where Abou Diaby has signed for Marseilles (all the best to him) and Wojciech Szczesny has been sent on loan to Roma (I suspect this isn't a developmental thing) it was becoming a bit of a frustrating week ahead of a Wembley occasion. Where was the signing we've been looking out for? Well it seems we're not getting one of those just yet. In its absence we have been given the next best thing this afternoon with the news of contract extensions for both Theo Walcott and Santi Cazorla. That's a massive boost as far as I'm concerned just before facing Chelsea on Sunday.
The whole Theo business looked like it was set to drag on yet again. It was so important to get it all tied up before the start of the season. The closer things got to January the more the chances of him leaving for nothing in 2016. Clearly the Manager has been able to persuade him that he will get enough time on the pitch despite the presence of Alexis, Giroud, Oxlade-Chamberlain and everyone else that might play wide or through the centre. There is no doubt that, despite being far from the most gifted footballer you'll ever see, Theo's pace scares the living daylights out of even the very best defenders (his record against Chelsea and John Terry/Ashley Cole is superb really). From the bench he can be absolutely deadly and the runs he sometimes makes (and should be making all the time) are just the sort of thing that Ozil has been crying out to play with. In my view Theo is also a decent finisher and he has certainly scored his share of goals. To have him tied up to a deal is massive. Now all we need is for him to finally stay fit enough to play for a prolonged period. The lad probably deserves a bit of luck to go his way. Here's hoping his time has arrived.
The extension for Santi has come as a bit more of a surprise. There wasn't really any talk of contract deals with him so this has come out of the blue. As with Theo it is a massive shot in the arm. At the end of last season that cretin Balague on Sky was telling everyone that Santi was off to play for Atletico Madrid, done deal, everything agreed. He was even "quoting" entire conversations as he always does - he must have better infiltration surveillance technology than MI6 such is the detail he can provide from conversations at which he wasn't present. Of course, as with most things that come out of Balague's mouth, it has turned out to be utter bull***t. After Christmas, with his move to a deeper role next to Coquelin, I thought Santi played his best football since coming to Arsenal. His Man Of The Match award in the FA Cup Final was a bit over the top, but he certainly was a key player in our improved form in the second half of the season. His performance at Manchester City should live long in the memory. He is currently favourite for the name on my shirt this season, just ahead of Koscielny (I'm not buying the away shirt which looks almost brown when you get close to it in the flesh). I couldn't be happier that Santi is staying.
As I said at the top this double announcement is a massive boost before Sunday. I'll be previewing the game tomorrow night (assuming I get home from work at something close to the time I'm supposed to). In the meantime just think about how much you dislike Jose Mourinho and realise that Sunday might be a little more important than it really should be.