Great goalkeepers - Casillas one of the greatest 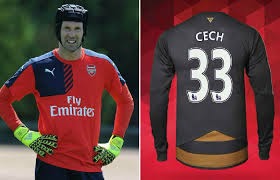 So Arsenal have finally got around to announcing Petr Cech's squad number. It seems that he has personally chosen to wear 33 on the back of his Arsenal shirt. Among a plethora of reasons he gave was that he intends to be part of Arsenal's spine, and there are 33 vertebrae in the human spine apparently. Who knew Petr Cech was a keen biologist? I had fully expected that he would simply inherit the number of whichever of the other goalkeepers left Arsenal following his arrival. I suspect that Arsenal's commercial arm has taken a hand to hasten the announcement of a number ahead of the Singapore trip this week during which Cech is likely to play his first game in an Arsenal team.
Arsenal have been filling space on the official website this week with lots of pictures from the early pre-season training. Something has struck me from the pictures of our new goalkeeper, and not only the fact that he wears his silly hat on the training pitch. In the past, whenever I've seen photos of the Arsenal goalkeepers in training, they have always been  pictured together. I found it noticeable that Cech appears to be training as an individual. I hope that this is simply a situation created by the camera, but given that Emi Martinez has certainly been in training this week, and that Szczesny was due back the same day as Cech, I find it a concern that the new man might be a bit less about the team and a bit more about himself. Certainly it is something to keep an eye on.
As I'm on the subject of goalkeeping it seems timely that Iker Casillas' long career at Real Madrid came to an end yesterday. I never thought I would see Casillas play for any other club in his career. I started to think of the game against Real Madrid at Highbury in 2006 when he produced one of the finest displays of goalkeeping I have ever seen. It's often the case that a goalkeeper gets made to look good in a game by poor finishing (no better examples of this last season than De Gea and Fabianski at our place). That night in the Champions League it was nothing like that. Casillas was simply incredible and totally unbeatable. Thankfully, at the other end, we had Jens Lehmann putting in a similarly outstanding performance including a save from Raul that is up there with the greatest ever. There can have been few better 0-0 draws ever played (the only other 0-0 I remember being quite such a good game was the initial FA Cup semi-final at Villa Park in 1999 against Manchester United). I had long admired Casillas from his first appearances for Real Madrid. That night he was simply the best in the World as far as I was concerned. I wish we could have signed him when Arsene incorrectly decided Jens wasn't the man.
Reminiscing on Casillas got me thinking that I've been lucky enough to see some incredible goalkeepers in the flesh in the last 30-odd years. Many of them would be on any list of all time greats. My very first game saw Pat Jennings and Peter Shilton against each other at Highbury. In the years that have followed I've had the privilege (and frustration) to see the likes of Seaman, Schmeichel, Buffon, Casillas, Van Der Sar, Oliver Khan, Lehmann (who displaced Khan for a home World Cup and nearly won it for Germany), Cech, Manuel Neuer and Vince Bartram. I'd also throw in a mention for Francesco Toldo who must be the most under rated goalkeeper I've ever seen. It's quite the list of greats.
The eagle-eyed will notice that only one of these men is under 30 years-old. Indeed Cech is the second youngest at 33. Take out Courtois and De Gea from the modern crop and I don't see any goalkeeper with the potential to join this list any time soon. That being the case it would seem that it's not just England that is struggling to develop top goalkeeping talent (Joe Hart is way below the standard of these blokes as far as I'm concerned). It pleases me that we have Petr Cech at Arsenal now as, besides a centre-forward who can score tons of goals, most top teams include a top goalkeeper. It has certainly been the case in Arsenal's history.
As the week goes on there will be plenty of Arsenal news doing the rounds and we'll get to see some youngsters on Wednesday in Singapore. It would be a surprise to see any signings over the next week as Arsenal's hierarchy are all out there for the Asia Trophy. That being the case we'll just have to hope for a couple of early wins instead.
Posted by DvbrisG at Sunday, July 12, 2015