BBC going out of their way to attack Arsenal Football Club 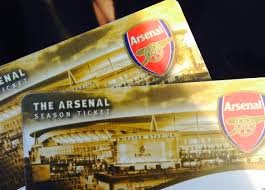 The Arsenal AGM took place this morning at the stadium. I'm not a shareholder so I wasn't there, but it seems that you don't have to be one these days to get an invite. For some reason, what should be a private meeting of the shareholders, was attended by assorted invited press and media people, as well as the now ever present "friendly" bloggers. As for the content of the day it seems clear that Ivan and Arsene and everyone else dodged the questions in their usual inimitable fashion, though Sir Chips Keswick did admit that nobody at Arsenal questions what Arsene Wenger does. If you want a run down I suggest you have a read of one of those nice blogs that never criticises the Club in any way.

What I want to talk about today is the BBC's open attack on Arsenal FC yesterday under the guise of their "Price of Football" report. Every BBC journalist, and every BBC headline, and every BBC article was having a pop at Arsenal. There was even a report on an MP saying 3rd kits are unnecessary and at the top of the article on the BBC website was a picture of Jack Wilshere wearing the Arsenal 3rd kit. Of course, Arsenal are the only side who have a 3rd kit aren't they? In fairness Arsenal did not help themselves with the answers as to why they have one in the first place, claiming that it's because the fans want it. Since when did Arsenal do anything the fans want? And who are these people whose lives are improved by the presence of a blue Arsenal shirt? What the spokesman should have said, for it's a statement of fact, is that UEFA insist on 3rd kits being registered for Champions League and Europa League purposes. You won't be surprised to know, however, that the article didn't carry any quotes from Manchester United. Or just about any other side for that matter.
Yesterday morning I got in to a debate on Twitter with one of the authors of the report in to the cost of tickets who was determined to show how us Gooners are worse off than everyone else. Now let me make it clear that I am not about to defend the Club for the price of tickets - we all know they're too expensive, especially when the money generated is not then spent on properly improving the team we are paying to watch. Matt Slater is the journalist in question and all he wanted to keep saying in defence of the headlines is that Arsenal are the most expensive so that's the reason why they are the news. What the report ignored is that Arsenal fans pay for seven cup-ties within the price of their season tickets. One of the BBC idiots (re-tweeted by Mr Slater) pointed out that we might not play those ties, especially if we weren't in Europe (which we have been for nearly twenty years in a row) giving the impression that we being robbed blind. I pointed out that any unused tickets are credited back to the season ticket holder, but that received no answer - it doesn't fit the BBC narrative.
I also asked Mr Slater why no mention is made of the cut-price season tickets for OAP's, or the League Cup pricing at Arsenal. He told me that "all clubs do that" but then couldn't tell me who provides cheaper tickets than Arsenal in those cases. I would have said that, if you're producing a detailed report in to the cost of going to football, then such things are fairly important unless you are wishing to present deliberately skewed figures.
Another thing that wasn't looked in to in the report is the price that Arsenal supporters have to pay to attend away matches. For West Ham away at Christmas we are talking the best part of £80 to sit in the lower tier corner at Upton Park. That makes even Arsenal's Grade A match ticket prices look not so bad. My seat at Arsenal is £80 for those games, but I sit in the upper tier, level with the 18-yard-line (yes it's too expensive, but I use it as a comparison). Or maybe we could talk about the £50+ restricted view seats in the away end at QPR? And why no mention of promoted Burnley putting up their season tickets by over 30% this Summer? Matt Slater of the BBC had no answers for this because the fact is that this report was all about taking a pop at Arsenal.
As I said at the top, I have no desire to defend Arsenal over ticket prices. But all the time they're selling them out they won't care. Why should they? And I won't feel guilty about paying for mine as a so called "boycott" of tickets would be a waste of time. If I didn't buy my season ticket then someone else would and then I'm in a position where I can't get in for the big games. Why would anyone cut off their nose to spite their face like that? What I can't abide, however, is an organisation like the BBC wasting public money to tell us all something that we already knew, and to then deliberately set it up as an attack on Arsenal.
Posted by DvbrisG at Thursday, October 16, 2014