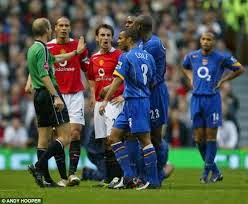 This time ten years ago I was at Old Trafford. It was to be Arsenal's 50th game in the unbeaten run. Just two months previously Jose Antonio Reyes had served notice of his ability to destroy Manchester United in the Charity Shield at Cardiff. Arsenal were THE dominant force in English football. Quite simply, we were unbeatable. Henry was at the peak of his powers and Reyes, having settled in to Arsenal life, was the best player in Europe at the time. At the back we had Ashley Cole, the World's best full-back, and Sol Campbell, the World's best centre-half. In midfield was Patrick Vieira, the foremost midfield player of his era. This was the best team English football had witnessed, playing the best football the country had ever seen. What happened at Old Trafford on 24th October 2004 still haunts me to this day and I boil inside at the injustice of it all. There has been no bigger scandal on a football field in England than what went on that afternoon. If I was an investigative journalist it would be the first thing I would be looking in to, to find out why it happened.
For a couple of years at this point Arsenal had been better than Manchester United. Somehow they had won the Premier League ahead of us in 2003 after we were kicked off the pitch in certain matches (and seen Sol Campbell outrageously sent-off in the Title showdown at Highbury against them). This lead to Arsenal dropping some points in the run-in and United sneaked ahead off the back of weak refereeing. When we played against them they knew they could only hope to match Arsenal by being violent. On the night we won the Title there in 2002 they had got away with murder, but still didn't have enough to beat us (or even get a draw). Ferguson was sending his side out with the express intention to injure Arsenal's star players. The media never made any effort to censure his tactics. Instead they would describe it as a test of Arsenal's temperament. English football in a nutshell - those foreign types don't like the cold steel Mr Mainwaring.
What went on in the match of ten years ago today should be the subject of much scrutiny. Instead it is made in to a bit of a joke by the BBC and Sky with their continual references to "pizzagate" where Cesc Fabregas apparently threw food at Ferguson. Well ha-f***ing-ha. Personally, I don't find it funny. I find it still grips me with anger that Arsenal were cheated out of a magical 50th game unbeaten. If you need to be reminded of what went on, and how Mike Riley showed himself to be the most corrupt referee in the history of the English game, then watch this video from Youtube. The only thing that is almost as scandalous as the refereeing is the commentary of Andy Gray and Martyn Tyler. 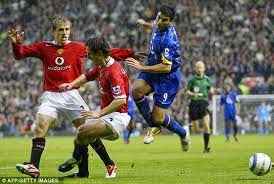 Gary Neville is the most respected TV pundit in the country these days. But this match is the reason why I despise him. The video doesn't actually do it justice. The assaults that he and his brother made against Reyes that day would have seen them arrested were they not on a football pitch. The ugly sisters didn't act of their own volition. Ferguson had clearly instructed them to go and hurt Reyes. The Spaniard never got over it. His career should have been on the up and up. Thanks to the Neville's he never again hit the heights his ability deserved. Gary Neville should look back upon this match and be ashamed of what he did to another professional footballer. As for the test of Arsenal's temperament, the players showed incredible restraint in not repeating what had occurred the previous year when Keown went after Van Nistelrooy (after yet more cheating).
Let's get back to Mike Riley. Whether through his own ambitions, or because he was paid off, he cheated that day. From the failure to deal with the Neville's, to the failure to send off Van Nistelrooy and Ferdinand (not even a free-kick!), to the penalty that only Andy Gray could see, Riley quite simply was corrupt. He also allowed Rio Ferdinand and Wayne Rooney to help him referee the game on the day. I remember Ferdinand was exceptional that day (aside from the foul on Freddie that should have seen him sent-off) but he was also in the referee's ear every time he blew the whistle. Riley allowed that to happen. Was Rio threatening him that the brown envelope might not be in the changing room at the end of the game? Riley is now the head of English referees. The man should not be allowed anywhere near football. If I had the money I would make it my life's work to prove Mike Riley was a cheat and to publicly discredit him.
The saddest thing of all is that the game went on to affect the players for a long time (though maybe not as long as it has affected me). We were top and flying at the time. We ended up trailing in behind Chelsea and haven't won the Title since. You can argue that the players lacked the mental aptitude to deal with the adversity of it, but how do you deal with such injustice? What's the point of taking to the pitch knowing that, no matter what you do, there are games you are not allowed to get a result from? I don't know how any professional sports person could deal with that thought.
Mike Riley and Manchester United cheated Arsenal and cheated English football on this day ten years ago. The media think it's funny. I don't.
Posted by DvbrisG at Friday, October 24, 2014