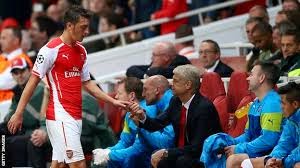 I didn't write anything after the Chelsea game. Due to being at work I saw only the last twelve minutes of the match live, and I would have been only going over old ground had I written a review. We all know that we're short of top quality in a couple of areas of the pitch and there is really no point now in going over and over it, or going over the reason(s) why. I could have written about the utter plank who set off a smoke bomb in the concourse of the upper tier of the away end, and the ramifications for other Arsenal fans (not only on the day), but if you follow my Twitter feed (@ARSENALDvbrisG) you'll know this was done to death on Sunday night - suffice to say the perpetrators mates consider themselves "real" supporters and people like me are not supporters at all. I shouldn't get in to rows with silly little boys, but I reacted to being called a "f***ing mong" in a moment of weakness. At the end of the day the flare incident was dealt with by the law and the young man will find himself banned from Arsenal. Well worth it, I'm sure.

On to business and we found out yesterday that Mesut Ozil has a knee injury. A serious knee injury. So serious that he couldn't train and was sent for a scan on his arrival at the Germany training camp. A tear/rupture to a knee ligament is the German diagnosis, and at least three months on the sidelines will now ensue. What we don't know now (and never will really know) is whether this is something he was suffering with before or during his worst display yet on Sunday. It would certainly explain the level of effort he was putting in after a couple of good performances in the previous week (though what can't be explained is his expulsion to the wing again by Arsene Wenger). I'm not going to go in to the fact that it's yet another Arsenal injury and whether or not there is something wrong with our medical team, or whether or not there is something else wrong at the Club, but there is more than coincidence to this, surely? I have theories but I'm only the same as any other bloke in the street. Whatever the problem is, I don't believe it's down to bad luck.
The injury itself could actually be a blessing for Arsene Wenger. For some reason he left Ozil on the pitch for the whole game the other day, and the reactions of Santi Cazorla and Jack Wilshere showed there was unrest in the camp. It didn't do Ozil any good to complete that game at Chelsea (regardless of whether or not he was already unfit). Even the most generous of Ozil watchers would have to admit that he has been poor, especially since the start of this season. You can bring out stats about completed passes, or ground covered, but use your eyes and be honest - one goal and one assist is not the contribution expected of a £42m attacking footballer. Frankly I'd expect better returns from Yaya Sanogo, never mind Mesut Ozil. Wenger would clearly never want to drop a player who cost so much money, so the injury gets him off the hook. The potential embarrassment for Manager and player is no longer there. I would wager that we will see not very much of Mesut Ozil in an Arsenal shirt before he departs for Europe next Summer (he might have gone in January but for the injury). Sadly the player who should have replaced Ozil is now at Chelsea, but let's not go there again.
If there is a disappointment in the injury it is that Theo Walcott is due to return to the side in the next few weeks. We've spent over a year wanting to see Ozil combining with the flying Theo and now we won't get to. There are no guarantees, however, that Theo will stay fit (he never has done in the past) or that he is still blessed with the searing pace that is his only real quality against top defenders. Having said that, the injury to Ozil means having Theo available again couldn't be much more timely. Serge Gnabry is also returning with Theo, leaving us with plenty of wide options (and that isn't a dig at the fact that Gnabry has ballooned during his long lay-off).
The player who might just benefit more than any other from Ozil's injury (and Ramsey's) is Alex Oxlade-Chamberlain. It's fair to say that his most eye-catching performances have come in the middle of midfield. His power and pace is a huge asset, and he can go past opponents in there in the same way that Vieira or Diaby could. With the lack of options now in there (and that has nothing to do with squad "depth" - any club would be struggling with so many injuries in the same part of the pitch) The Ox has to be the man to fill the gap. It could be the chance he's been looking for and it could spark our season if Ox and Jack Wilshere can combine centrally. Santi Cazorla can also move back to where he's supposed to play and Danny Welbeck and Alexis should reap the benefits of that.
All in all, while I have to feel sorry for Ozil, I don't see that this injury particularly weakens Arsenal on the pitch. We're entering a spell of games where Ozil might have come in to his own against lesser opposition, but I sort of want my superstar signings to be dominating games against the likes of Chelsea somehow. Two woefully out of form, yet star, midfield players are out injured. I think a couple of in form midfield players should be excited at the chance to prove themselves once and for all. Now, can Ox and Jack stay fit for once themselves?
Posted by DvbrisG at Thursday, October 09, 2014