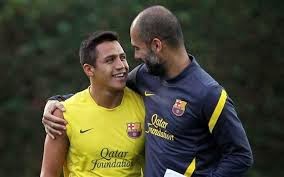 I was delighted with the win at Sunderland. I lamented the fact that we were poor in Belgium last week, despite the result. Well, it was another poor showing at Sunderland but, on this occasion, it doesn't much matter. Playing away from home a couple of days after an away Champions League match the only thing of consequence is the result. I also don't really care that we got the win off the back of mistakes by Sunderland players - we missed a number of chances to put the game away in any case - but I want to analyse why it was that those players were forced in to errors. I also want to praise Arsene Wenger for his team selection at Sunderland - dropping the show pony Aaron Ramsey to bring in Arteta alongside Flamini added much needed steel in front of the usually exposed and under strength back four. It was key to keeping things tight as far as I'm concerned.
There was one common denominator in the mistakes made by Wes Brown and Vito Mannone on Saturday, and that was Alexis. It's no coincidence. A feature of the Chilean's game since he arrived has been his non-stop running, something that Martin Keown highlighted at the World Cup (yet people like Robbie Savage and Danny Murphy are on Match of the Day on a Saturday night). The man has incredible fitness levels and an even more incredible desire for hard work on the football pitch. Just imagine what Arsenal would be capable of if everyone played like Alexis when we haven't got the ball. In fact, you don't need to imagine, you just need to watch videos of Barcelona and Bayern Munich under Pep Guardiola.
Guardiola's Barcelona side were the best club side I've ever seen, even better than Arsenal's Invincibles. Everyone talks about the way they moved the ball, and the genius of Messi that tied it all together. But that overlooks the real key to Barcelona's success. What they had, more than anything else, was an insatiable desire to win the ball back from their opponents. Their game was based on incessant pressing of the opponent, the theory being that technically inferior players would present the ball back to you when pressured by two and three of your players. The result was that you would win the ball back in the opposition half and keep attacking them again and again. Eventually they are going to get out of shape and cave in. Technically adept players could occasionally pass through this by simply completing three passes - as with Andrey Arshavin's winner for Arsenal against them a few years back. But such occasions were rare indeed. Alexis wasn't often part of the first-choice line-up at Guardiola's Barca, but he was trained to play that way. He still does it. The fitness levels required are exceptional, and Barcelona would often play the final 20 minutes utterly knackered, but they were usually a goal or four up by then. Alexis, on the other hand, appears tireless.
It must be frustrating for Alexis to play in a side where he is often the only one doing this high up the pitch. You often see him beckoning team mates to support his harassment of the opposition. If he ever needed to show why his style is so effective then he should look no further than Saturday. The speed and closing down of Alexis saw Wes Brown, a technically inferior opponent, forced in to a mis-kicked pass that allowed our forward to run through and open the scoring. Vergini was forced in to a hurried back-pass that was then cocked-up by a similarly hurried Mannone for the second goal. Yes, the goals came from gross errors in the Sunderland defence, but the mistakes were forced by Alexis and his supremely committed style of play. He was able to do that on his own, so why don't the others work out what could happen if they actually helped him out occasionally?
One other thing to say about Alexis is that he often seems to slow us down a bit. He also gives the ball away a lot (though he's then the first one trying to win it back). He delays the pass, possibly a bit too much. However, given the way we go back and forward across a well organised defence perhaps doing something a bit different is to be welcomed on occasion. I'd like to see him run at men a bit more, as he did for the opening goal against Hull City. But the point I'm trying to make is that Guardiola didn't, as popular theory suggests, espouse the tiki-taka football that is associated with Barcelona and Spain. Pep said the other week he hates it as every pass should have some idea of attacking behind it (or words to that effect). Alexis is the living embodiment of everything Guardiola stands for and wants from his football team. I hope to God that Wenger will embrace what Sanchez is doing and get the rest of the squad on the same wavelength - what I fear is that he'll coach it out of him.
Posted by DvbrisG at Wednesday, October 29, 2014