Off to Brussels with The Arsenal!!! 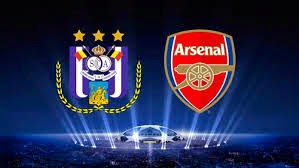 A football match 44 years in the making

Arsenal travel to play Anderlecht tomorrow for the first time in over 44 years. That night, at 3-0 down, a Ray Kennedy goal changed the course of Arsenal history and set the Club on it's way to the Double a year later. What followed at Highbury, according to anyone who was there (I wasn't born until 9 years later), was the greatest night the old place ever saw as 18 years of frustration was finally wiped out with a trophy. For people of my age, who have grown up with the stories of that night, the name of Anderlecht is almost mythical and it has a special place in Arsenal folklore.
I'm off to Brussels first thing in the morning to see the game. The Belgian capital is no more than ninety minutes or so from Calais, which is itself an hour away from me via the Channel Tunnel. A £50 return trip for four of us makes going to this particular European away jaunt a very affordable one. It's my first European away game since Paris in 2006 so I'm very much looking forward to it. In the times that I have been away with Arsenal in Europe I am still waiting for a win (I missed the Cup Winners Cup Final in 1994) so I hope tomorrow breaks my duck. We'll have to play better than on Saturday but an Arsenal side playing properly should have far too much for the Belgians. I just hope Arsenal are up for it on the night.
The team news is that Emi Martinez comes in for the suspended Szczesny. It seems that David Ospina is out for three months, I assume from the late thump he got from the Galatasaray forward in injury-time a few weeks ago. Youngster Ryan Huddart seems to be the beneficiary of the spare place on the subs bench. Martinez has played a couple of times for Arsenal before. On his debut against Coventry City I thought he looked a fine prospect, but he followed that with the 7-5 game at Reading. In pre-season I was very impressed with the Argentinian and the way he commanded his penalty area. If he can show the same dominance in a Champions League game then he can really lay down a marker.
It will be interesting to see how we line up at the back. Does Calum Chambers play at right-back or at centre-back? If he's in the middle then does Bellerin play, or are Gibbs or Monreal put at right-back? My personal choice would be for Coquelin to play on the right of the defence but that isn't really likely to happen. It's something we shouldn't have to be thinking about, but we are where we are. Chambers will play, it's just a case of where.
Jack Wilshere was in training today and has travelled with the side, as has Lukas Podolski. I'd be tempted to give Podolski a game tomorrow simply based on his brilliant dismissal of rumours of a move to Spurs yesterday. I've never understood why Arsene Wenger doesn't give Podolski a proper run, and there is a chance tomorrow to go with him (or Joel Campbell) up alongside Welbeck - the shortage of properly fit midfield players and the need to win the game might influence other bosses. Theo Walcott also trained with the team but I haven't seen any photos of him in the travelling party - that's not to say he won't be a surprise inclusion on the bench but it seems unlikely given his time out injured.
Too often Arsenal have been lacklustre away from home in Europe. We've failed to get decent results against some fairly poor opponents. With our last two games being at home to Dortmund and away in Turkey the need to win the two games with Anderlecht has never been more stark. A fast start is essential and I'm hoping Welbeck's pace will cause them problems. If it does then he needs to have brought his shooting boots with him.
I'll write a review of my day at some point on Thursday, hopefully with a big three Champions League points safely in the bag.
Posted by DvbrisG at Tuesday, October 21, 2014