The night everything changed for the better 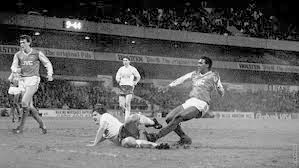 When Rocky revived The Arsenal

Two of Arsenal's senior players were announced as having signed new contracts today. Good news indeed. However, I'm not going to go in to that this evening - it can wait until tomorrow. Instead I'm going down memory lane. My favourite posts that I've written have been the ones that reminisce on the past in some way and this is no exception.
Twenty-seven years ago this very night the modern era of Arsenal was started by a last minute goal from David Rocastle. It would mark the beginning of a run of success that would continue until 2005 in Cardiff (or Paris the following year, perhaps). In many ways it's the moment that makes the current trophyless spell all the more hard to watch. March 4th 1987 didn't end with silverware, but the nature of the win gave the players the belief and the springboard they needed to beat Liverpool at Wembley six weeks later. It was the end of a three part drama played out in North London and saw more successful comebacks than the career of Elvis Presley (that might be an exaggeration).
I was still only seven at this time all those years ago. We'd earned the replay with a win the previous Sunday, coming back from 2-0 down on aggregate to get the result. I can remember that pretty well, especially Quinny's sliding finish for the winner. It seems bizarre now that ITV should choose to not screen the replay live on that Wednesday night. I suppose it also seems bizarre now that there was a replay in the first place. Younger readers will be shocked to know that the League Cup (Littlewoods Cup) was a massive thing back in the 1980s.
With TV only providing us with late night highlights you had to have a ticket to actually see the game. For those of us who weren't at White Hart Lane it was a case of tuning in to Radio 2 (there was no Radio 5 in those days). There was no DAB signal either.
I can remember the scene in our house pretty well. Being a very young boy I didn't have the patience or the concentration to be listening to crackling voices on a radio all evening. As such I was in and out of the darkened bedroom where my Dad and brothers were listening to the game. My eldest brother (who had turned 15 on the day of the second leg) was wearing, as he did for every game we played around that time, his yellow Arsenal hat. For some reason he had decided this was "lucky" and so he couldn't possibly be listening to the game without wearing it (me and my other brother had less faith in the mystical powers of our half-and-half Arsenal/Celtic and Arsenal/Rangers bobble hats). They were more quiet listening to that game than they ever would be these days, but I suppose there aren't many games that are listened to like that in these days of digital TV and broadband. As for the content of the commentary it's more than hazy.
I suspect that my constant coming and going got on the nerves of the other three huddled round the wireless. Given how annoying I was as a little brother I probably got told more than once to either stay or go. I do remember the cheering (I think) when Rocky got the winner. We were all allowed to stay up (was it half-term?) to watch the highlights that night. Being as young as I was I clearly didn't understand what it actually meant, even though I was becoming mad on Arsenal by then, much as my own eldest boy has over the last two years (he is eight now). At the same time I knew that it meant David Rocastle was a hero. He was my hero (along with Charlie Nicholas, of course). I knew from the smiles on the others' faces that this was big.
When it came to the Final I missed out. Dad could only get three tickets so, being the youngest, I was the one who couldn't go. I'd have to wait until the Luton game a year later for my first Arsenal match at Wembley. I'd leave disappointed that day, but the events of March 4th 1987 had marked an upturn in Arsenal's fortunes that none of us could have imagined would carry us to where it did.
In hindsight I wish I'd been a couple of years older. I could have appreciated what was going on that much more. I'd remember it much more clearly now. Regardless of how old I was I'm definitely pleased it happened. I'm pleased that it lead to what we enjoyed for the rest of the Graham era and most of the Wenger era. As for Spurs, they've never recovered, and we can all be happy about that.
Posted by DvbrisG at Tuesday, March 04, 2014