Big Cup ties are what fans live for 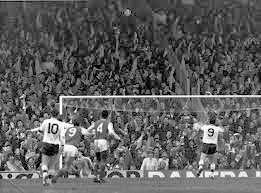 McClair - even worse penalty than Ozil

Being over 30 I still get excited at the prospect of a sixth round FA Cup tie. It's the quarter-final of the greatest tournament in World football. Of course you wouldn't know that if you were getting your football fix from Sky or the BBC as the FA Cup has become unfashionable to them. The sixth round should mean that you're ninety minutes away from a trip to a neutral ground (I don't mean Wembley either, but that's another thing that has spoiled the FA Cup along with no replays and penalty shootouts). Sadly it has also become unfashionable to the clubs involved. Arsene Wenger told us earlier this week that he would "love to win the FA Cup again". Tomorrow he gets his chance to prove it by not "resting" any of his players from what is, as far as I'm concerned, the biggest game of our season so far.
I notice from the pictures of Arsenal in training today that Laurent Koscielny was absent. He didn't play for France in the week after getting injured in training so, along with Jack getting injured when away with England, we come out of the international fixtures minus one of our first choice centre-backs. Bringing in Thomas Vermaelen, who hasn't played in months, is not an ideal situation to be in. However, it's all we have at the moment so we have to get on with it. I don't fancy Vermaelen up against Lukaku but it will be up to The Verminator to show he's still got plenty to offer this Arsenal team. He certainly should be looking to prove something to Arsene Wenger. Nobody else should be missing from those who were available last Saturday. My personal preference would be for Szczesny to play in goal (no need to rest a goalkeeper and the idea that Fabianski automatically plays in the cups is a nonsense). Szczesny is the first-choice goalkeeper so he should play every game that matters (which is every game we play) provided he's not injured or suspended. The dilemma for Arsene Wenger is across the midfield. I expect Ozil to come back in, but who else plays? I can see Flamini and Arteta being paired once more, though I wouldn't object to Flamini and Oxlade-Chamberlain in the engine room. The Ox certainly must start the game in some position as his pace is crucial. I would also like to see Gnabry included to form a twin threat of speed, but I imagine that won't happen. Such is the way that Wenger goes about his business I also wouldn't be shocked to see Sanogo in for Giroud, but there would be a justifiable claim for that in any case after Giroud's poncey efforts at Stoke last week.
The atmosphere at the previous FA Cup tie with Liverpool was probably the best we've had in the new stadium, especially in the last thirty minutes of that game. Big FA Cup games (and League Cup games in the past) have always inspired the Arsenal hordes. Tomorrow should be no exception. The jeopardy of elimination from a tournament adds an edge to things and gets people going that little bit more. Those atmospheres have the ability to inspire your own players and intimidate the opponents. One of the North Bank's finest afternoons came in a fifth round tie against Manchester United in 1988. Just check out the reaction to Brian McClair's penalty in this video and tell me you wouldn't want to have been part of that.
There was also a great Highbury night against tomorrow's opponents in a League Cup semi-final just a week or two later in front of one of the last 50,000+ gates at the old place. This time it's the Clock End leading the celebrations (and Perry Groves showing the importance of pace). I'd love to show these to Arsene Wenger in the hope that he might realise how important tomorrow is. It means far more than winning in Munich next week, that's for sure.
Posted by DvbrisG at Friday, March 07, 2014