A show of faith and loyalty 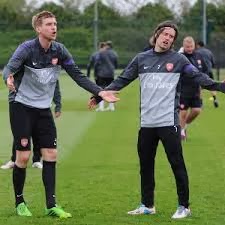 "Come on Bac, what are you waiting for?"

The announcement of new contracts for Per Mertesacker and Tomas Rosicky didn't come as too much of a surprise. Arsenal had made little secret of the fact that both were being offered deals and that agreement wasn't too far away. Keeping hold of two experienced international footballers is certainly a good thing for Arsenal and it shows that "project youth" is well and truly dead.
Mertesacker has been outstanding for the most part in the last twelve months. Yes, there is the odd game when he is way off it (Saturday against Stoke being a case in point). However, it is clear to just about anybody watching this Arsenal team (with the possible exception of Arsene Wenger) that the leader of the side is the BFG. There is no doubt that Mertesacker is exceptionally slow to cover the ground, but he has an incredible football brain. For me he is the best reader of the game we've had at Arsenal since O'Leary or Bould. That ability to see what's going to happen is what compensates for his lack of speed. If he was to have O'Leary's pace and Bouldie's nastiness he could be the best centre-back in the World. At 6'7" I would love him to be more aggressive and to attack the ball more at both ends of the pitch (and cut out the turning of his back on the ball when forwards are shooting - your paid to get hit). When Mertesacker does go for the aerial ball properly he is never beaten to it. Lose the timidness that sometimes affects his play and he will dominate even more, especially with the pace and football ability of someone like Laurent Koscielny alongside him. Signing up quality, experienced players on long-term deals is a very good thing for Arsenal. Our defence is not perfect, but it's a damn sight better when Mertesacker is in the team.
Tomas Rosicky's new deal is a little more of a departure from the established method for Arsene Wenger. Rosicky is well over 30 and has suffered more than his share of injuries during his eight years as an Arsenal player. To see him put on a two year deal might surprise the likes of Robert Pires. Unlike Mertesacker, Tomas was to be out of contract in June. As such he could have gone anywhere he wanted and got himself a nice big signing-on fee. For me his decision to stay shows a display of loyalty that is rare in the modern day footballer. As I said, Rosicky has missed a lot of football with long-term injuries. Throughout that time Arsene Wenger and Arsenal stuck by him. He still misses a number of games with knocks but when he does play he is key to the way we play. There are few players in the Arsenal squad who match the effort of Tomas. He has added a mean slide tackle to his game in the last couple of years as well. Now he has decided to repay the faith the Boss has shown him by signing on to end his career as an Arsenal player. Rosicky says he wants to win the Premier League with Arsenal before he hangs up his boots and we can all identify with that. I would say he's a true Arsenal man.
Now then, Bacary, how about you?
Posted by DvbrisG at Wednesday, March 05, 2014