Arsenal paper over Tottenham's crack and the Gooners enjoy the Craic 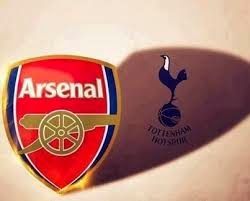 Tim Sherwood is as deluded as the most rabid of Tottenham supporters, which is unusual considering he's an Arsenal fan. His post match interview must have been cringe worthy to the Tiny Totts watching as he claimed that Tottenham deserved to win the game and that Arsenal's win was merely "papering over the cracks" for us. What an embarrassment. If Arsenal had cracks to paper over then you can be sure that we made sure Spurs mighty cavern was filled by Tomas Rosicky's glorious strike.
At half-time I couldn't understand why Sky's experts (though one of them was self-confessed "Chelsea Man" Paul Merson) were saying how Spurs had been so dominant. Yes, they'd had a lot of the ball, but Arsenal should have been three or four up before the break. We got the first goal in stunning fashion from Tomas Rosicky (as I may have mentioned) and then hit them on the break time and again. Every time we went forward we looked like we would score. Lukas Podolski was ridiculously given offside just as he was about to lay one on a plate for Giroud before Alex Oxlade-Chamberlain missed a hat-trick of chances on his own - did he have the right boots on yesterday? There was also time for Podolski to hit the side netting himself. As I say, we should have been away and over the hills long before half-time. What exactly did Spurs create in that half? Szczesny didn't have a save to make (in fact he didn't make one until the 89th minute).
In the second-half Arsenal were poor, there is no doubt about that. The lack of composure in possession was disturbing while the front two might as well have gone and sat in the stand. I'm sure when Arsene told Santi Cazorla to take on the Ozil role he didn't mean that he should become invisible for 90 minutes. As for Giroud I couldn't believe he got through the whole game without getting the hook. I wrote a couple of weeks ago about how he ponced about at Stoke and yesterday was exactly the same. Giroud gave us nothing up front and the ball just kept coming back. I'd start with Sanogo at Chelsea next week to run their centre-backs across the pitch before bringing on Giroud when they're tired. If Giroud plays next week and he performs like that then Cahill and Terry will have the cigars on and the sun loungers out.
How about another picture? 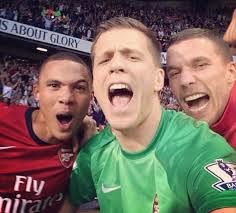 For all that Spurs huffed and puffed in the second-half they still didn't create chances. Their best opportunity came from Szczesny dropping the ball and having to be bailed out by Koscielny and Mertesacker who were both absolutely brilliant yesterday. Szczesny has a long list of mistakes in big games, throughout his career. I wouldn't be averse to Fabianski coming in for him now. Having said that, the one thing with Wojciech is that he doesn't lack confidence and he was assured enough through the rest of the game to keep coming for high balls and taking them. His handling when Spurs finally got a shot on target was excellent. I kept hearing about the effort Adebayor was putting in, but all I saw was Mertesacker beating him in the air and Koscielny dominating on the floor. I'm not sure how they were seperated in the Man Of The Match stakes, but I suppose Bryan Robson wasn't there to accept the award for himself (ask your Dad if you're too young to get that joke).
I thought Arsene got the changes wrong yesterday. Arteta's lack of pace was causing us a problem in midfield, both going forward and in defence. I saw no point in taking off Rosicky or Podolski whose effort on either side of the pitch was massive. They also provided attacking threat for Arsenal. The commentators said that Ox had a tight calf but I don't necessarily believe that - he looked like he was moving alright in the post-match celebrations. Talking of which, this was the scene in the away end for a full twenty minutes after the game as the Gooners were locked in - it's taken ten years but the Invincibles finally have their song and I can't wait to sing it at Wembley.
Shall we have another picture? 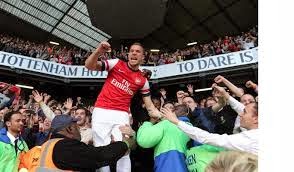 Podolski lapping it up

I must mention Mike Dean and the fact that he had perhaps the most anonymous game I've ever seen from him and maybe the best display of refereeing I've seen all season. It was most unusual for Dean to be so invisible as he usually wants to be the star of the show. Fair play to him yesterday and he was, in hindsight, probably having his view obscured when Vertonghen fouled Koscielny for a clear Arsenal penalty late on. However, his linesman who, to that point, might have been described as a "busy little f****r" most certainly did see it yet chose to keep his flag by his side. Well played Mr Dean.

You can always rely on the Tottenham fans for comedy and they are even better in defeat than they are before games. Funnily enough I've never known them so defeatist before playing us. Most of them expected a hammering for a change. Usually they're going on about this being their year and all the nonsense we expect of them. Yesterday there were two highlights from them. The first was seeing Nacer Chadli described as a "Belgian Andy Sinton" by an old friend of mine who happens to be a Spurs fan, and the second was the gentleman pictured below on the Tube after the game. There's nothing like beating Tottenham. 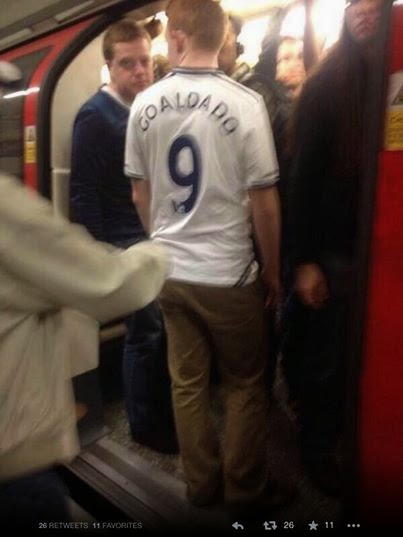 They just keep on giving