Better than last week, King Koscielny back for Wembley? 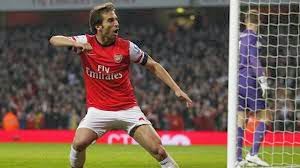 One final note for optimism. I met Laurent Koscielny in the car-park after the game yesterday and he said that he will be fit in “two weeks”. Assuming that it’s a real two weeks and not a Wenger two weeks he should be back for Wembley and Wigan Athletic. Fingers crossed.
Posted by DvbrisG at Sunday, March 30, 2014