Ozil and Gibbs keep the Tottenham DVD's off the shelves 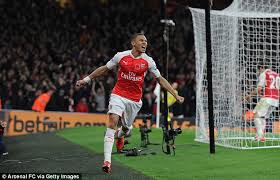 We came within about ten minutes of meltdown yesterday. At the same time we should have won the game. All in all I'm not disappointed with a point. I couldn't be there yesterday (again) as I was working. My eldest got his first taste of the North London Derby instead and I think he quite enjoyed himself. I've since watched the game back and, while Tottenham spent a large part of the match on top, the best chances fell to Arsenal, especially in the second-half. On another day Giroud would have buried at least one of those headers and we'd have beaten Tottenham once again - more on that below. The fact that they played so well, while Arsenal were largely poor, and yet still they couldn't beat us should be concerning them far more than it does us. Their obsession with Arsenal remains their biggest bar to success and a lot of their fans that I know were gutted they didn't get the job done yesterday. If Arsenal had turned up before the 70th minute or so we'd have hammered them. No power shifts just yet.
Some things are concerning me right now with regards to our defensive game. I saw a stat yesterday showing that Arsenal have allowed more shots on target than both Watford and Bournemouth in the Premier League this season. If you ever needed proof of what Petr Cech is offering us then it is there for all to see in that particular statistic. The last couple of games in the league I've been annoyed at the absence of Gabriel and all of a sudden Coquelin doesn't seem to be providing the cover he has in the past. Cazorla has also been woefully off form and should never have taken the pitch yesterday given that he was apparently unwell before the game. Koscielny cost us the goal with his ill-advised offside attempt but this isn't the first time that has happened in the last couple of weeks. At Swansea he stepped up and Gomis should have scored. At Bayern it was Gabriel who tried to leave his man offside only to see Lewandowski score, and then yesterday we know what happened. Someone is surely telling the centre-halves to do it, but it can only work when you're properly organised and closing down in the midfield. It could have cost us yesterday. 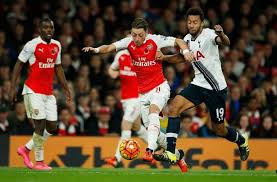 Mesut Ozil - he's better than you

We would have lost yesterday without the class of Mesut Ozil. Through sheer weight of creative passes we finally made the breakthrough when Gibbs got on the end of yet another spectacular Ozil ball from wide. It makes me laugh that Alli was given man-of-the-match by ugly boy Neville having watched the majesty of Ozil's display. In the last month, or six weeks, he has been exceptional for us. For the first time since his early Arsenal matches (and the FA Cup Final last season) he is producing the sort of play that we knew he was capable of. I have slagged him mercilessly on this site for the way he has played for us, mostly because I know how good he can be and he simply wasn't getting near to that level. What Arsenal must do now is get the sort of players who can support him by putting away the chances he creates.
Olivier Giroud is our only striker. Even when Theo Walcott is fit, and playing centre-forward, Giroud is still our only real striker. Giroud is a very good player. You can't score the number of goals he has since he arrived at Arsenal if you are not that good. However, the fact remains that he misses too many good chances. Unfortunately they are often in big games like yesterday. I've always felt we don't always play to his strengths by not getting balls in from wide. Ozil simply kept putting them in yesterday and Giroud kept winning them by being too good for Vertonghen (what a joke of  a player that guy is) only to not find the back of the net. It's the difference between being very good and being exceptional. I would put Giroud on the level of Edin Dzeko, for example, which is just below that of someone like Sergio Aguero. Until at least January he is all we've got so I was pleased the fans didn't turn on him yesterday and, in fairness to him, he never stopped trying.
Not being able to see the game live I had to listen to it on Radio 5. John Hartson was the summariser and he got quite excited by our equaliser, but all I'd heard for most of the game was about Kyle Walker and how good he was. It was no surprise to me, and I suspect to most of the Spurs fans, that it was he who lost Kieran Gibbs for the equaliser. I had a little jump about in the office when we scored and spent the next ten minutes pacing the floor and worrying that the now dominant Gunners would get caught on the break. As I said at the top, I wasn't displeased with a draw.
It was important to go in to the international hiatus without losing, especially against that lot. Yes, it was another two home points dropped, but Spurs are a reasonable side and this is their biggest game of the season. Not losing was huge as it meant we lost nothing on Manchester City and, following the chasing we got at Munich, the result steadied the ship a little. Now we have to hope that some of the injured players can regain fitness before we next play. The run of fixtures coming up is full of games we should, and need to, win. The more players we have available for that the better. If I'd been offered our position today following the opening day loss at home to West Ham I would have taken it all day long. Meanwhile the Spurs fans will be continuing to spit their bile at the screen as they read this kind of thing (as many of them are sad enough to read an Arsenal site when they see it on NewsNow or Spurs' own media page) while dribbling uncontrollably. Such is life in the household of the mugs. However, Harry Kane did fulfill a childhood dream yesterday by scoring in front of the North Bank. Gooner.