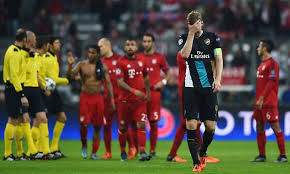 You can always rely on this Arsenal team to let you down badly. Losing to Bayern Munich is not a cause for shame. However, getting battered by them simply because you are totally devoid of tactics and motivation is unacceptable. In terms of humiliation this was possibly even worse than the hammering at Sheffield Wednesday last week. There were a few common denominators in there too, not the least of which were Per Mertesacker, Mathieu Debuchy and that horrendous piece of cloth masquerading as an Arsenal shirt. George Graham always wanted his players to look the part as then they would be more likely to play the part. I don't think he would ever have stood for this thing that PUMA have produced for us.
Leaving aside (very slightly) tongue in cheek comments on Arsenal's sartorial elegance it really was an embarrassment last night. If it hadn't been for Petr Cech then I dread to think how many we'd have lost by. It was no preparation at all for the visit of the mugs this Sunday and, without our great goalkeeper, it could have been so bad as to have derailed the whole season. Players like Gabriel and Coquelin, usually so full of fight and effort, looked like they were disinterested for most of the game - what was that fifth goal all about?! The reaction to the first two goals seemed to be one of total indifference from our players. Had it have been Chelsea, with the rumours currently doing the rounds about their commitment to their boss, the media would have been using it as ammunition for bad headlines. Following the way we played to keep Bayern out and beat them a fortnight ago it was nothing short of bewildering to watch. Yes we were missing Bellerin and Koscielny, but Debuchy is an established international footballer and Gabriel has looked superb so far this season. The loss of those two defenders is a blow, of course, but surely not enough to be responsible for totally banjaxing the team performance.
I have very little to say about most of the game. The fact is that we allowed ourselves to be outplayed by a very good team. I'm sure Bayern couldn't quite believe how easy it became in the first-half. For ten minutes it looked like it would be one hell of a game. Mesut Ozil was just about the only one of our players to shine on the night and I thought he was superb when he got the ball, absolutely outstanding. Bayern took the lead through a defensive calamity and we "equalised" straight away through Ozil. Of course it was disallowed for handball, I think probably correctly, and we went backwards thereafter. I have to say, though, that every time Lahm, Neuer or Guardiola looked in the general direction of the referee he gave them a decision. The goal that was disallowed might not have been on another occasion but Neuer and co were straight in the face of the officials (which is another thing our players don't do anything like enough of - of course it looks terrible but if you can't beat them...). The worst example was when Alexis beat Lahm and was away down the wing only to be hacked to the ground by the Bayern skipper and no free-kick was given. Put that kind of thing with an awful lack of effort from our players and the commentary of Ian Darke and Owen Hargreaves and you have the recipe for a miserable night. At least I wasn't one of the poor Gooners that had spent their money to go and support a group of players who deserved so little of it.
In terms of our Champions League future it actually makes little difference. To go through we will have to win both games that are left. The only difference is that we would have to win in Greece by two goals in the final match. The thing that worries me is that we will beat Zagreb, and come up just short at Olympiacos and end up in the damn Europa League. I know I am not alone in wanting us to finish fourth in the group if we can't snatch second. If we are to challenge for the Premier League with a squad so short of numbers then the last thing we need is Thursday night nonsense. Whether this team can actually make that challenge in any case is in serious doubt again after the kind of performance we saw last night. It is simply not acceptable, but then we seem to keep saying that far too often.
Posted by DvbrisG at Thursday, November 05, 2015