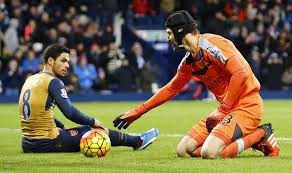 The Premier League this season is there for the taking. The very fact that Leicester City are now top of the table, deep in November, tells you that there is a lack of quality there this season. Manchester City spent in the summer but failed to address their obvious weak areas - letting Dzeko go left them with no decent cover for Aguero, while they still lack a decent crop of centre-backs. Now that sounds rather familiar, doesn't it? Arsenal have no genuine cover for Giroud, who isn't exactly Sergio Aguero in the first place. We also lack something in defensive areas. For some reason Mertesacker has been brought back ahead of Gabriel and we have struggled ever since. More frighteningly we never bought any cover for Francis Coquelin. This meant we were always one injury away from potential disaster. Yesterday it all came home to roost.
The performance was nothing we haven't seen before. Too much passing, not enough shooting. The attitude seemed, as it so often does, that we will beat this lot easy because they're not very good. The players and the Manager (especially him) never learn. And now we have no Coquelin. If he is out for any period of time longer than a week or two we are stuffed, especially as we are now about to enter the busiest time of the season. We still managed to miss the chances that should have won us the game, including the penalty, but the self-destruct button that exists within this squad is still frightening. It isn't even the first time we've conspired to lose to a side that ends up with more goals scored than efforts on target. It is depressingly familiar.
When Coquelin got injured I couldn't understand the choice of Arteta to replace him. We had lost our dynamo in midfield and replaced him with a man who, for all his very good qualities when in possession, is simply not able to cover the ground. It's not Arteta's fault, but he isn't up to that job. Flamini is more able to get around the midfield, albeit not as technically gifted as Arteta, so he had to be that man to come on in my opinion. When he did come on Arteta seems to have had one of those days where he was always in the wrong place at the wrong time, as evidenced by him deflecting the ball in to his own goal for the winner. He also has an apparently chronic calf problem which has now plagued him for nearly three years - our medical team is an unfunny joke and they are of no help to the players or the Manager whatsoever. I think now is the time for Mikel to admit defeat and call it a day as that calf simply will not get better.
The fact that we are still within a couple of points at the top is down to the same reason that Leicester sit in first place - the other teams are also mediocre. We have a squad with some very good players, but we lack depth. We've all known that since before the end of last season. You don't need to be a rocket scientist to work that out. Going in to the game yesterday we were entering a run of fixtures where maximum points should have been taken - we don't play a top side until Manchester City in Christmas week. We are now already staring down the barrel when we should be sitting ahead of everyone else and looking to open up some clear daylight. Without Coquelin to protect that fragile defence we are in trouble. But then we knew that would be the case, didn't we?
Posted by DvbrisG at Sunday, November 22, 2015