Ozil is now heading in the right direction 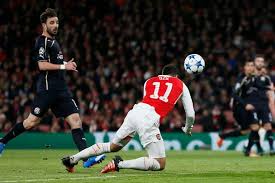 I've had a really busy week that has meant I have had no time to write anything since last Sunday. Just about the only free time I managed all week was when I went to the Zagreb game on Tuesday night. Consequently I've turned down the chance to go to Norwich tomorrow so that I can at least spend some time at home with the family.
Having not been able to get behind the computer all week I've been sitting on some serious praise for Mesut Ozil ever since Tuesday. I have criticised Ozil a lot over the last couple of years. I believe that what I have written is totally justified based on the way he has performed for most of the time he has been at Arsenal. However, in the last couple of months he has produced some magnificent form and is the stand out player in the Arsenal side at this time. There are still occasions when I wonder where he's gone, but he seems more and more involved in the team play and his running actually has a purpose for the team now. On Tuesday evening he was sensational and scored a goal with his head, diving in at the feet of the goalkeeper - I guarantee he would not have been putting himself in that position this time last year - and nearly grabbed a second headed goal late on. When he combines with Alexis they are an absolute joy and privilege to watch.
Arsenal need Ozil to stay fit and to keep up this form. With Francis Coquelin out for months we might need to be scoring more goals to win games. When Ozil is in the mood, as he has been recently, he is close to unplayable with the ball at his feet. I would still like him to run at defenders more, and certainly to be more selfish at times - he talks about wanting to score more goals but too often passes up the opportunity to shoot in order to try and play in someone else.
There was one moment on Tuesday that really stole my attention and I have been seeing back in my mind ever since. I still can't work out what he did and, having not seen it back on TV, I still can't explain it, assuming it actually came across to the TV viewer in the first place. The moment I'm talking about happened just a moment before the second goal. Ozil was given the ball on the left corner of the penalty-area. My view from the East Upper placed me in a position where I was almost directly behind him as he turned towards goal. Nacho Monreal made a run down the outside and Ozil did something, I know not what it was, whereby the whole of the defence followed Monreal - they were so sure Ozil was about to release the ball to him. It must have been the most imperceptible dummy movement, but at the same time so obvious to the players that they all bought it. Without even touching the ball he sold every opposition defender right out of the game and then swung in a great cross towards the middle. It was one of those indescribable moments (I've just spent an entire paragraph trying to explain it) that you pay your money to watch from great players. Zagreb failed to clear the ball and Nacho won it back and set up Alexis to make it 2-0.
I've waited a long time for Mesut Ozil to show us how good he really is. Long may it continue, and I hope he can add goals to his play, as it is the sort of form that can send you on the kind of winning run that wins Championships - remember what Dennis did in 1997-98? Add goals to what Ozil is doing right now and you might have that kind of influence playing out in front of us once again.
Posted by DvbrisG at Saturday, November 28, 2015