One King coming to Arsenal this Christmas 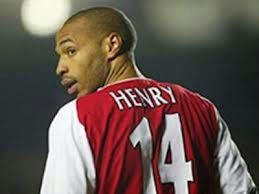 HE is coming home

Things are looking up a bit after the last couple of games. Good wins (and clean sheets) against Dortmund and West Brom have seen us go in to December feeling quite a bit brighter than we might have thought just a week ago. I was really pleased with the win at West Brom. Yes, we are still missing too many chances, and we can still give away too many opportunities at the other end, but the chances can't keep being missed. Eventually they are going to go in the net and someone is going to take a pasting. I wouldn't mind if that started tomorrow evening against Southampton. Before that, though, is the good news we've known has been coming.
Unfortunately for Thierry Henry his New York Red Bulls lost their play-off tie at the weekend. Thierry signed off with a classic assist in his final MLS game. I can't help thinking that he has utterly wasted these past few years, but he has doubtless been financially rewarded in a big way. But now his time in America is over. And, it being Christmas time, everyone is waiting for the coming of The King. Arsenal supporters are no different, and this particular Arsenal supporter wants to see our King where he belongs.
Yesterday Henry issued a statement to say that he was finished with New York Red Bulls, but not that his playing career was over. Within an hour his official Facebook page had changed its cover photo to a shot of his statue gazing at Arsenal Stadium. Thierry clearly advised his people to show that Arsenal is where he wants to be and he needs to show it to everyone.
Arsene Wenger confirmed today that Henry will return to Arsenal, though he knows not when, or in what role. The key point here is that The King may yet play for us once more. I read a report (and you know I pay no attention to the papers normally) that Thierry Henry wants to sign a contract at Arsenal to the end of the season so that he can retire as an Arsenal player. I hope that this is one of those occasions where the players representatives have planted the story. He may be 37, but just having Henry on the bench and around the squad would be huge. Can you imagine defenders in the opposition line-ups if he was to trot on with fifteen minutes to go? They'd be drawn to him simply because of who he is, and that would create space elsewhere. Add to that his very presence around the strikers and younger players in the squad, as well as the impact on the supporters, and you have a mix that can create a feel-good atmosphere at the Club for a few months.
It is 100% certain that Thierry Henry is coming home. It will happen sooner rather than later. And what I wouldn't give to see him play in that shirt just one more time, score one more goal, and to take my boys to watch him - they'd forever be able to say "I saw Thierry Henry play for Arsenal". Anyone who was there when he scored against Leeds on his comeback will know the impact that Thierry Henry can have on Arsenal. Let's see it one more time, Arsene. Make it happen.
Posted by DvbrisG at Tuesday, December 02, 2014