So much better than last week 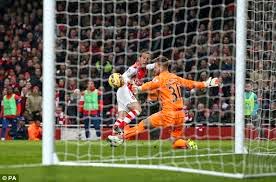 Some finish that was

As we get closer to Christmas you can expect the usual things on the website. I'll be writing the annual mid-season review at the beginning of next week, between the Liverpool game and Christmas itself, and then I'll be posting a brief piece on Christmas Eve. Hopefully there will be some stuff to write about before we get to the Liverpool match.
The Facebook page ("It's MY Arsenal Opinion") has had a lot of new hits overnight. I don't know why that should be, but welcome to any new readers/followers. You can also follow me on Twitter and Instagram by searching for @ARSENALDvbrisG - though the language on the Twitter account can often be industrial, so be warned!
Posted by DvbrisG at Sunday, December 14, 2014