An utter cretin, Appearing for Arsenal 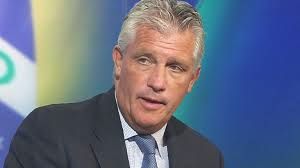 Could you be any more anti-Arsenal?

Anyone who sat through Tony Gale's attempt at co-commentary on Sunday will know where this is going. We've had plenty of awful analysts talking with the most vitriolic bias against Arsenal in recent years, but I think Gale took us to a whole new level at West Ham. Let's leave aside his claim that a player dummying the ball in to the net is not interfering with play "because he didn't touch it" (and Gale was not alone with this particular old nonsense) and fast forward to just about everything else he came out with on the day.
I'll start with Andy Carroll's elbow in to the cheekbone of Mathieu Debuchy. Gale couldn't understand why Debuchy was "rolling around" (he wasn't) as it wasn't a "flailing arm" from Carroll. Let's not let the evidence of our eyes get in the way of some anti-Arsenal sentiment, eh Tony? After all, what normal, honest, English full-back would be put on their backside by the pointed elbows of a 6'4" centre-forward who is carrying more weight than a professional footballer should be? You're right, Tony, Debuchy was an utter disgrace getting his face in Carroll's way. These modern footballers "go down far too easily" apparently, though the criticism was less vehement when a West Ham player literally rolled around on the floor just a few minutes later.
Everything Arsenal did was met with some kind of stick from Gale. I'm not sure at what point Arsenal have upset him. He was never so quick to criticise us when earning his money on Capital Gold many years ago. Every free-kick it seemed was unjustified, every tackle apparently out of order. He accused Laurent Koscielny of elbowing one of their players in the second-half, even though Koscielny was actually behind the player and face-on to them at the time. Now I know Koscielny is an exceptional player, but a contortionist he isn't. At least the penalty was such a stick-on that even Gale couldn't argue with it, though Winston Reid clearly felt he could and somehow got away without being at least booked for it.
Gale saved his highlight of the day for the final minutes of the game. When Calum Chambers was coming on we had Gale announcing to viewers all over the World that Arsenal's two substitutions were worth four minutes of injury-time alone! I swear you could actually hear his bottom lip jutting out and trembling as the tears welled up in his eyes at the thought of Arsenal winning the game. His dislike of Arsenal even extended to criticism of West Ham's best player - after all Alex Song played for Arsenal. When Song didn't celebrate his "goal" Gale gave him pelters on the grounds that "he was only at Arsenal for a couple of years". Idiot. Although his getting at Song did provide the comedy that many former footballers provide whenever they try to be clever on TV. Song gave the ball away in the first-half and Gale said "...he's trying to elaborate too much". Oh dear, Tony. I think you might have tried to be a bit over elaborate in your phraseology for someone of such limited intellect. If you want me to elaborate further then leave a comment at the foot of the page. Cretin.
I won't review the game these two days later. Suffice to say I thought Arsenal played very well for most of the match, especially in the second-half, though Arsene Wenger's substitutions were once again utterly crazy in a game we were totally dominating. We held on for a good three points, however, and a draw at Southampton on Thursday will mean a decent Christmas period for us.
I've often said that there is no way Arsenal would feature this site on their own website due to the regular criticism I make of the Manager and of the Club itself. Imagine my surprise, therefore, when I got a phone-call last night from my Dad to say that "Best Of The Blogs" from Christmas Day was an abridged version of my Christmas Eve piece! It's nice to be recognised by the Club. After all, Arsenal is the very reason for all of this. Further to that, if you buy a programme at the Hull City game on Sunday you will see an article by me for the "Final Word" piece therein. I hope you enjoy it.
There will be the briefest of brief posts tomorrow.
Posted by DvbrisG at Tuesday, December 30, 2014