A sad note to start as Arsenal bring some cheer 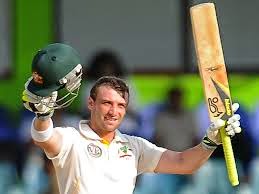 I promise that this will develop in to a positive post based on the football from Arsenal last night. However, I have to start on a sad theme. If you read my profile near the bottom of this page you will see that I am a cricket fan. I played the game to a good standard but I'm now more of  a spectator with a tattoo of the England cricket crest on my leg. Cricket is my main sporting passion outside of Arsenal. It is with great sadness that I woke this morning to the news that Phil Hughes had died as a result of being struck on the neck while batting a couple of days ago.
It's quite frightening that, while completely freak in its nature, is the sort of thing that could actually happen to anybody that sets foot on a cricket pitch. For it to happen to a top level player merely underlines that a cricket ball bowled at your head is a very dangerous thing indeed. It's such a sad, sad thing to happen. A big miss when he's injured

It was a pleasant experience to watch Arsenal play last night. I thought it was a fine all round performance, especially after half-time when we were barely troubled, largely due to a more organised looking defence. I have to say that I thought Nacho Monreal, Kieran Gibbs and Calum Chambers played really well, while Emiliano Martinez made two very good saves and never looked remotely ruffled. In front of the defence Mikel Arteta was outstanding, and yet another bad calf injury (this is clearly a chronic problem that he has now) means we are going to miss him badly. I have come to realise that, a bit like Gilberto, you notice Arteta more when he isn't around. Flamini lacks the positional discipline, and the ability to keep the ball, that Arteta has. It is testament to the man that Mikel Arteta has re-invented his game and curbed his own redoubtable attacking play to work for the team at Arsenal. Is he as good as Gilberto was? Of course not. But that doesn't mean he isn't extremely influential, as a player and as Arsenal Captain. I hope that Wenger will bring Francis Coquelin back in to the fold now as Flamini simply isn't up to the task.
It was nice to see Yaya Sanogo get a goal at last. I thought he looked offside from the other end of the ground, and TV shows that he was. Maybe that's a payback for Anderlecht's first goal the other week, but it really underlined some pretty bad officiating last night. Just before half-time Mertesacker was beaten by, I think, Aubemyang down in front of me with three officials less than ten yards away as the BFG pushed his man square in the chest - the ref inexplicably waved play-on. Anyway, back to Sanogo, and I thought he did well last night. Obviously he lacks a bit of quality, as was seen when he was put through by Aaron Ramsey and failed to get a decent shot away. However, he worked hard up front on his own and won numerous headers against strong defenders. Sanogo did all that could be asked of him in the circumstances, and hopefully he'll gain much needed confidence from his performance. I still don't believe he should be playing ahead of people like Podolski and Joel Campbell, but the Manager seems to have a lot of faith in him. I loved the "He scores when he wants..." that comically swept round the ground after Sanogo's goal.
I'm running out of things to say about Alexis. His goal last night was stunning. He didn't necessarily have his best match last night, but he still played well. His power and strength is incredible for someone so small, and he allies that to great skill and control of the ball. It seems unbelievable that he couldn't really get a game at Barcelona on a regular basis. I was excited when we signed him and he hasn't let us down. Some players simply have that bit of stardust that sets them apart, and Alexis is certainly one of them. I wish the other Arsenal players would learn from his work rate when we're not in possession, as that kind of thing doesn't even require genuine football ability. What a signing he is proving to be.
The other player who stood out again last night for me was Alex Oxlade-Chamberlain. Following the worst game I've seen him play against Hull the other week he has been outstanding pretty much ever since. He brings direct running and pace on the wing, though I'd like to see him cross the ball more when he's beaten his man on the outside - you have to think that it must be under instruction that we always cut back inside in those situations. He was also desperately unlucky with an outstanding volley that came back off the bar. The Ox is in great form at the moment.
It made a nice change to come home from Arsenal last night in a good mood. Hopefully, with qualification secured now, we can get back to the real business of winning games in the Premier League. December is set to be a tough month, so let's go in to it in a good way with a win on Saturday, setting us up for Southampton next week.