A Merry Christmas to Arsenal Fans Everywhere - Highlights from 2014

I could write this morning about Arsene's latest comments and have a go about the ridiculousness of the whole situation. But it's Christmas Eve and negativity is unnecessary today. Instead this will be the usual, brief, traditional Christmas Eve post. I have two little boys desperate to get the laptop back so they can keep an eye on Norad Santa Tracker to check he's actually on his way to them, so brevity is of the essence.
As is traditional I'll start with a thank you to everyone that has read this site and contributed on Twitter, Facebook, Instagram and the site itself (though maybe not the idiots from Tottenham and Stoke that choose to read it for some reason). As it happens, there have actually been less hits on the site than in previous years. Maybe the writing is getting worse, and maybe the constant moaning about Wenger and the team has driven people away. As I write there have been in the region of 170,000 hits this year, with 973,000+ in total since the site was inaugurated in 2010. There has also been less output from me than in any previous year. Work and family continues to get in the way of trivial stuff like this, more now than ever. There was also an unexpected hiatus during the World Cup. Regular readers will remember that a good friend of mine died suddenly in June and this left me in no mood for writing about football for a few weeks. Hopefully, next year there will be more regular stuff but we'll have to wait and see how it goes. As ever I am humbled that so many people do read what is written here. It remains, as it always will, my opinion on Arsenal. I could garner more hits by making up stupid post titles about Arsenal signing some £50m player but what would be the point in that? I'm writing stuff to let out frustration, or express the most delirious sense of happiness that Arsenal can inspire in their supporters, not for hits on a website that costs me no money and makes me no money. If I ever start dipping in to gossip, rather than fact, then please shoot me.
So what were the highlights of 2014? Perhaps it's no surprise that none of them are from this season, and that all of them came from the FA Cup run. Aside from signing Alexis Sanchez there has been precious little to cheer since May. 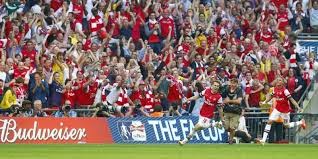 The best feeling in nine years

I suppose the first high point came in the first few days of the year with the smashing of Tottenham in the FA Cup 3rd round. It was 2-0 at the end, but it was as comprehensive a thrashing as you're ever going to see. Tomas Rosicky rolled back the years to dominate the game and Theo Walcott ran their defence ragged. Typically that was the last we saw of Theo. The Cup run was full of special moments, of course, but Podolski's goal against Liverpool was a cracker, and the hammering of Everton to guarantee a place at Wembley had the stadium rocking. Both were great days.
My second highlight of the year was Santi Cazorla's winning penalty in the semi-final shootout against Wigan. Fabianski had played his part with two saves, but Santi sent us wild. Knowing we would play Hull or Sheffield United in the FA Cup Final meant we knew we were never likely to get a better opportunity to win a trophy at last. It was a moment that will probably never be repeated, in that there were well over 50,000 Arsenal fans inside Wembley for the semi-final. The noise, the atmosphere and the celebrations will live long in the memory - even if Roy Keane was offended by them.
The happiest moment was yet to come as we finally ended the drought. We all know how we did it the hard way, but when Aaron Ramsey scored the winner it was what going to football is all about. The picture above, with the massed Gooners in the background, is the best illustration I can find of the unbridled happiness that football can create. Again, there was a sense of relief, but also one that our pride had been restored. Arsenal had won the FA Cup in a classic Wembley final. It really doesn't get much better and it makes you want more and more of it. I've felt it many times, but the distance between 2005 and 2014 maybe amplified things this time. Being there with my son and the other members of my family made it extra special. 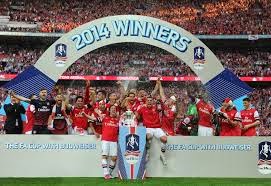 And so to my player of 2014. It would be easy to select Alexis, but he's only been playing for us since August. It has to be a player who has been around all year long and, for me, there are only two contenders. Given that we can't defend you might find it odd that I'm choosing between Kieran Gibbs and Laurent Koscielny. Gibbo has progressed so much in the last year, and he is far and away the best English left-back in the Premier League. However, my player of the year has to be King Koscielny. We miss him so much in our side when he isn't there. And he has the habit of scoring the most crucial of goals. In recent years he is the stand out piece of business done by Arsene Wenger - an unknown who has developed in to a top class footballer. His goal at Wembley was the one that got us level and allowed us to go on and win. He can't get fit soon enough as far as I'm concerned. People say we'd be lost without Alexis, but the fact is we are already lost without Koscielny.
So that's it. Christmas time is here again. I'll sign off by greeting, in particular, my readers and family friends in Norway, Germany, Austria, Czech Republic and Italy. You all know who you are and I know we'll see you all soon at Arsenal - all of you are among the truest Gooners I know. It's the time of year for happiness and I hope Arsenal can make us all that little bit more cheery on Boxing Day. Have a great Christmas wherever you are.
And also to everyone else reading, from England to Australia, Happy Christmas to you all.
Posted by DvbrisG at Wednesday, December 24, 2014