A worker not a waster 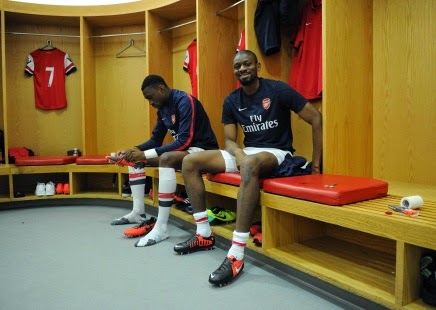 This knee is a wreck

When Arsenal posted the picture above on their official website I suspect they hadn't looked all that closely at it, though I also suspect the photographers had done exactly that. Stuart MacFarlane and Dave Price are outstanding at their job and whichever of them took this (I think it was Pricey as it was at an U21 game) knew exactly the detail they were showing to the fans with it. We should be grateful that they did. This proves once and for all the scale of the injury that Abou Diaby has been struggling with since March 2013, as well as numerous other problems with which he's been struck down in his Arsenal career.
The most striking thing, aside from the permanently bruised look at the front of the knee is that massive scar to the side. In the old days these were not uncommon, as Paul Gascoigne would attest from his own ACL injury. However, with more modern techniques, particularly among the elite sports medics of the World, most of these kinds of operations are carried out with keyhole surgery - Robert Pires did both his cruciate ligaments yet his scarring is nowhere near as gruesome as Diaby's. You just wonder how badly Diaby's knee was banjaxed. When you see this it is not really surprising that he's taken as long as he has to get back on to a football pitch.
There is no doubt in my mind that Abou Diaby's career has been wrecked by the deliberately executed leg breaking tackle at Sunderland on 1st May 2006. Quite apart from the damage that particular injury did in its own right, everything that has followed surely has something to do with that incident. We can only imagine the stress that was put on the muscles and ligaments around it in the process of rebuilding the ankle and lower leg. The eagle-eyed will no doubt point out that the ACL scar is on the opposite leg to the one that was broken, but just think of the compensation that leg has been making for the broken one since it was repaired. Both of Diaby's lower limbs have suffered time and again from muscle pulls and ligament strains.
I've seen Abou Diaby get dogs abuse in recent years due to the time he has spent out injured. I have regularly said that Arsenal should have cut their losses on him as there is no way he will ever be fit enough to get through a sustained spell of games. The evidence of the last eight years points you in that direction. However, none of this is Diaby's fault. The lad is not lazy. He is not a waster. He is not "stealing a living". To come back from so many serious injuries must take some incredible willpower on the part of Diaby. The psychological impact of constantly seeing your career taken away from you, just when you might begin to think you're over it all, must be truly awful. Yes, £60k (plus) per week softens the blow but he didn't decide to pay himself to be an Arsenal player. For me he should be lauded for an amazing desire to want to play football that has driven him through the rehabilitation process on so many occasions.
Another thing I regularly see is people scoffing at the idea that Diaby is a fabulous footballer. I've seen people call him lazy, inconsistent, disinterested and much worse. I must admit that I have been frustrated by his performances on many occasions in the past, but I long ago came to a realisation on this. It is my belief that Abou was able to play a game, maybe two games, without too much pain. However, once he got to the third (and the very occasional fourth or fifth) game he was in such pain that he simply couldn't get around the pitch properly. This would then lead to yet another spell on the sidelines. The best example I can think of is the way he played unexpectedly at Fenerbahce in a Champions League game some years back. He simply ran the game, scoring and creating goals. Within a fortnight he was out again. In many ways it summed up his career.
The most annoying thing as far as I'm concerned is that I (and all Arsenal supporters) have been robbed of the chance to enjoy the development of the player that was to replace Patrick Vieira. Diaby had all the attributes he needed to do just that. Had he stayed fit he would almost certainly not still be an Arsenal player, as Real Madrid or Barcelona or Manchester City would have paid big money to get him. As it is his career has been wrecked by some no-mark who never made it at Sunderland. What I have now, however, is enormous respect for a guy who has tried and tried (and is still trying) to get there. I said a few weeks ago that I could see him scoring the winning goal in the FA Cup Final. He just might, you know.
Posted by DvbrisG at Wednesday, April 23, 2014