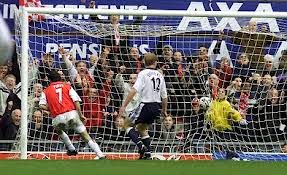 As it's FA Cup semi-final week it's not inappropriate for a little bit of a retrospective piece. I hope you enjoy it.