Defending Wenger for a change, Santos a victim of the mob 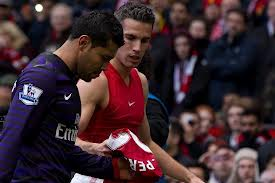 Where it all went wrong for Santos


It was a great win in the end on Saturday. I think most Gooners are rightly delighted at the genuine character shown by the boys at Sunderland. The game should have been out of sight before half-time but, after Jenkinson got himself sent-off (which should really have made it 9 v 10 at best for Sunderland,) Arsenal ground out a win in the best traditions of the Club. It may not be good for the blood pressure, but a 1-0 win like that gives me every bit as much pleasure as a 5-0 walkover. A crucial three points.
Before and after the game Arsene Wenger was fielding questions about Jack Wilshere. At his press conference on Friday he was asked about Jack playing the whole game for England last Wednesday. Arsene expressed his surprise, but he did not moan about it at any point. Given that he left Wilshere on the pitch for the whole game against West Ham when we were 5-1 up after an hour it would have been a bit rich for Wenger to complain. However, the press predictably twisted the comments he did make in order to get a cheap headline. A friend of mine (a non Arsenal supporting friend) started having a pop about Wenger yesterday and said that people like Wilshere are paid a lot of money to play twice a week. This of course ignores the fact that Jack has come back recently from 17 months out of the game with stress fractures. Again, Arsene Wenger should have given him a break when he had the chance, but he didn't really make comment on that in his press conference - the media created that story once again.
After the game on Saturday it was again Wilshere at the centre of the press attentions. It was no surprise that Jack's bruised body finally succumbed early in the second-half, even to such an innocuous looking sort of challenge (not so innocuous if viewed from the right angle). Arsene rightly called for Jack to get more help from referees. Since Christmas he has had the sort of treatment from opponents (almost always unpunished until late in the game) that I haven't seen since the Neville sisters kicked Jose Antonio Reyes out of Old Trafford. Gareth Barry, Ramires, Jack Collison, Lucas Leiva, assorted Stoke City players, Ramires again (for Brazil) and Lee Cattermole and N'Diaye have taken it in turns to leave marks on Wilshere in recent matches. Not one of those players has been sent off. Only a couple of them have been booked (late in the game) despite their constant fouling of Wilshere throughout the match. When Wenger talks about "protection" he is not asking for Wilshere to be allowed to play unchallenged. What he wants is for a referee to do his job and put an early stop to deliberate ploys to stop Wilshere playing by foul means. Barcelona stop opponents from playing, but they don't do it by kicking anyone. You can put players under pressure, and make challenges, without constantly booting them up in the air. The English mentality on this sickens me. Yet the same people who would choose to hammer Arsene Wenger for his comments are the same people that want England to win the World Cup. The fact is that if England's best player is consistently kicked in the shins he simply won't be around to play for England at the World Cup. But I daresay they'd blame Arsene Wenger for that as well. As for this idea that Jack's style is bound to leave him with injuries I've never heard such media inspired bull****. I very much doubt Bayern Munich will be kicking Jack next week, but they may well be able to stop him playing by fair means. I suppose it's a talent thing.

Andre Santos is off to Brazil and it looks like his Arsenal career has been a brief one. Never the most mobile, or defensively disciplined full-back, Santos enjoyed something of a cult following last season. I was never convinced by all that nonsense but Santos' ability to score a goal or two, as well as being a bit of a character, saw him become a reasonably popular figure. Certainly nobody was criticising him too heavily when he scored at West Brom on the final day of last season.
I was at Blackburn on the day Santos made his debut for Arsenal. His inability to hold his place in the left-back position was evident that day, as was his portly stomach. What was also evident was that he was rarely to be beaten by a winger who got him one-against-one. In fact I don't ever remember seeing a player dribble around Santos after being faced up by him. As a defender that was his strength. Going forward he was very good, but the trouble was that this was neglecting his defensive responsibilities.
Ultimately the praise of Santos in some quarters of the Gooner faithful was badly misplaced, but things didn't start to go wrong for him with supporters until we went to Old Trafford. More particularly, it all started to fall apart for Santos as he left the field at half-time. Whether it was a complete brain-storm, or a cultural misunderstanding from the South American (is shirt-swapping at half-time common in Brazil?) his taking of Van Persie's jersey as he left the field marked the turning point in his Arsenal career. From that point every mistake he has made (and there have been plenty, in fairness) has been hammered by the crowd. At Brighton he was torn apart by a second division side and even Wenger realised he had to remove him from the fray (he followed it up with a pretty good display against Liverpool, I thought, but the seed was sewn - particularly among the morons that inhabit Arsenal's internet forums).
I have to say that Santos has definitely reached the end of the road with Arsenal, and it is to Wenger's credit that he has dealt with it and got the player out of harms way - the memory of Eboue no doubt looms large for Le Boss. However, I just wonder if things might have worked out differently without the Van Persie incident. The media highlighted it, and the internet Gooners buzzed with indignation. A lack of playing time meant that when Santos got on the pitch he was rusty and looked unfit. His mistakes got the boo-boys off their seats to abuse him (it's amazing how many times Santi Cazorla can give the ball away without a complaint from the masses). Until his injury in Athens last season he was very much the preferred choice at left-back ahead of an inconsistent Kieran Gibbs. He also has twenty-odd caps for Brazil which tells you he's a very good footballer. With a little more fortune on the injury front, and little less stupidity on the shirt-swapping front, Santos may well have grown in to the English game and been a regular for Arsenal. As it turned out it was £6.2m that could have been better spent elsewhere. I wish him well in his future.