500 up with Dennis to the fore, Defoe playing the Anderton role for Spurs 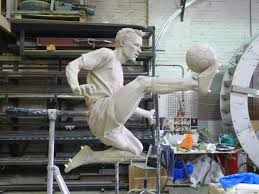 
This is the 500th post on It's MY Arsenal Opinion. I can think of no better way to celebrate than with the news of Dennis Bergkamp's much deserved statue. It seems that DB10 will be joining Tony Adams, Thierry Henry and Herbert Chapman by overlooking the stadium, cast forever in bronze. It's not the image I would have chosen of Dennis, but the fact that our greatest ever player is being recognised by Arsenal in this way is worthy of credit. Thierry Henry may be The King, but Dennis Bergkamp is without any doubt The Greatest.
When Bergkamp joined Arsenal in 1995 everything changed. Suddenly we were big-time again. We had signed a genuine World star. When David Platt quickly followed Arsenal fans had just cause to believe that we were moving out of the mid-90s malaise. Arsene Wenger would arrive a year later to bring it all together, but without Dennis we simply wouldn't have been the Club we are. There would be no Double's. There would be no Champions League involvement. There would be no new stadium (but I'll forgive him for his part in having to leave Highbury by being so damn good!) Dennis Bergkamp's presence, and his peerless ability as a footballer, revolutionised Arsenal Football Club. He also was the first World Class footballer to come to the Premier League before reaching his peak (the likes of Gullit were way beyond their best when they came to England). All fans of football in this country should rejoice in the greatness of Dennis Bergkamp.
Dennis is quite simply my favourite player of all time. I feel incredibly fortunate to have watched him play for Arsenal throughout the best of his career. I would urge all Gooners to watch this youtube video of Bergkamp's Arsenal career - it's just about the best thing I've seen in a long time.

A few years ago Darren Anderton became a bit of a standing joke for Arsenal fans. We all knew that, however long he'd been out injured for, he would rise like Lazarus for the North London Derby. It became a symbol of Spurs' desperation to beat Arsenal in a futile attempt to give their supporters something to cheer. The games against Arsenal became Tottenham's out and out biggest days of the season. If they could beat Arsenal then all would be well, pretty much regardless of what happened through the rest of the campaign. Gerry Francis clearly used to feel that he needed Anderton if it was ever going to happen. Like Francis' 70's hairstyle, it was rarely a success.
This season things look a bit different. Spurs are ahead of Arsenal going in to the game this weekend. They have the greatest player the World has ever known in their side. If Gareth Bale (one more goal, ten less assists than Theo Walcott) doesn't win Footballer Of The Year (for the whole Universe) then there really is no justice. There can be no doubt that this is their year. They are going to finish above Arsenal for the first time in eighteen years. EIGHTEEN YEARS! I can honestly say that I am so jealous of the quality Spurs possess right now. I mean, who wouldn't want to be third in the league with no prospect of winning it for the first time since 1961? Who wouldn't want Emmanuel Adebayor up front? Who wouldn't want the child of Pele and Tom Daley playing in midfield while dressed as the main simian attraction at London Zoo?
With all that being the case it should be a surprise that Jermaine Defoe is set to come off the treatment table to be in the Tottenham squad to play Arsenal this Sunday. I actually called this the other day as leopards don't change their spots. Tottenham's main ambition is still to beat Arsenal. If that happens then the knuckle-draggers will be delighted and it almost won't matter if they lose the next five games. It definitely won't matter if Defoe misses the rest of the season, just so long as he plays and scores against Arsenal. All the time that remains Spurs' ambition we can rest easily in the knowledge that they are forever in our shadow, regardless of what might happen on Sunday, or for the rest of this season.

More tomorrow when I expect to have been bombarded with abuse from some of the fools down the road.
Posted by DvbrisG at Wednesday, February 27, 2013