Wenger confirms that success need not involve actually winning anything 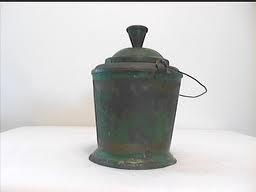 A tin pot - the trophy for 4th place?


I must pass comment on one or two things from last night before I get to what has overtaken Schalke as the business of the day.
Let's start with the fact that 0-2 flattered Arsenal. We were comprehensively outplayed all over the pitch. Had it not been for Mertesacker's outstanding first-half display we would have been out of the game by half-time. Andre Santos has taken one hell of a lot of stick for what went on down Arsenal's left last night, and I agree he was not at the races. However, it should not be overlooked that he constantly had two or three attackers up against him with no support whatsoever. Santos is regularly out of position, but what chance has he got to hold in the right place when faced with such impossible odds? In the preview piece for the game I talked up Lukas Podolski, but last night he did nothing to assist Andre Santos whatsoever with the end result being that the Brazillian was made to look like the scapegoat for most of our defensive woes. Santos also attempted to get us going forward when the opportunity presented itself, which is more than can be said for the likes of Podolski and Santi Cazorla. It was noticeable how people were more than happy to get on the backs of Gervinho and Aaron Ramsey (not without reason it should be said) but Cazorla appears to be the latest "darling" player who is allowed by the crowd to pose his way through games when it suits him. With the exception of the West Ham game he has been doing a very passable impression of Arshavin since the win at Anfield.
The defensive problems were/are not just to do with the back four and goalkeeper, either (Mannone had no chance whatsoever last night with the goals). Up until Saturday I thought Mikel Arteta had been utterly outstanding in the way he had played the defensive midfield role. I noticed on Saturday that he wasn't up to the standards he had set so far, and last night I was able to see why. One of the features of Arteta's play so far this season has been his utter discipline in the role assigned. In earlier matches, when Vermaelen has gone forward on one of his runs we have seen Arteta simply drop in at centre-back as Gilberto Silva used to. Last night I noticed that he started to follow Vermaelen towards the opposition goal, thus leaving us short-handed against Schalke's quick attacks. He was basically doing all the things that Alex Song used to get slated for - including giving away free-kicks and passing the ball to the opposition. Poor.
Finally I have to come to the so called tactics employed. Firstly it took until 30 seconds before Schalke scored for us to bring on Olivier Giroud. It had been obvious from early on, especially in the second half, that Gervinho was going nowhere up front (I thought he should have had a penalty at the time but, having seen the TV pictures, his dive was a disgrace and he should be fined a weeks wages for choosing to cheat when he could have squared the ball back to Podolski or Ramsey for a tap-in). When we then went a goal behind we had to wait until 7 minutes to go before bringing on Arshavin and the 17 year-old Serge Gnabry. The young German looks a precocious talent, but isn't it asking a bit much of him to come and try to change games like this (and we did the same on Saturday, lest we forget)? What was the point in taking off Carl Jenkinson? The lad is the only player in this side that can cross the ball. If he'd been taken off in order to alter the formation I could have understood it more, but all that happened was that Coquelin, our best midfielder on the night by a mile, went and played out of position at right-back. Then, having made that change and left Marouane Chamakh sitting on the bench, we had the spectacle of Mertesacker being deployed as an auxiliary centre-forward! I must be missing something.
Steve Bould's comments after the game should frighten Arsenal fans everywhere. Firstly he told us that the substitutions were pre-ordained by Arsene Wenger. Is anyone allowed to think for themselves at Arsenal? Does anyone not think that a change of formation or tactics might just be necessary when things are going quite so badly in a game? Bould also then told us that Arsenal would have been "delighted to escape with a 0-0." Now obviously he was talking within the context of a game where we were completely outplayed, but it amazes me that someone working for The Arsenal should come out with a comment like that when we are playing at home. It was another terrible performance and yet another repeat on Saturday will hand QPR their first win of the campaign, make no mistake about that.

Today was the AGM for Arsenal. From what I've read and heard it was not a smooth ride for Kroenke, Gazidis and Wenger. It seems that Gazidis even came a little too close for comfort to not being re-elected to the Board. The CEO of course gave the usual waffle about Financial Fair Play and how every Club wants it and blah blah blah, only for Arsene to then tell a shareholder after the meeting that Man City offered Robin Van Persie £300,000 per week to join them instead of Man Utd! We also hear from Gazidis that we are two years away from challenging the very best sides in the World. Funny, but I thought we were told that as the main reason to leave Highbury. That was over six years ago and we've done nothing but go backwards ever since. In short there will be no change in philosophy all the time Kroenke is running the show, so expect the malaise to continue as Wenger won't be forced to spend the money that continues to burn a hole in Arsenal's bank account. Meanwhile we will slip further and further behind.
The main thing that has caught my eye from the AGM, and most other Gooners it seems, is the fact that Arsene Wenger outlined his priorities. According to Wenger we play for "5 trophies" in every season. You can almost imagine the bemusement this must have caused the shareholders, so he chose to expand thus:
1 - The Premier League, 2 - The Champions League, 3 - Qualifying for the Champions League, 4 - The FA Cup, 5 - The League Cup.
So there you have it, according to Arsene there is definitely a trophy for finishing fourth. Success does not need to involve coming first in a competition. Success does not involve actual silverware or the need to be Champions of anything other than a bunch of also-rans. Wenger's contempt towards the FA Cup sickens me. Of course he is not alone as plenty of lesser Clubs than Arsenal treat the FA Cup with disdain in order to maximise their chances of staying in the Premier League. The difference is that those Clubs are not The Arsenal. Those Clubs would not be "expected" to win a trophy. Those Clubs are not charging the highest admission prices in the World to watch their side. Those Clubs are not including a full price for FA Cup matches as part of their season ticket. Those Clubs have not experienced the sheer joy of winning the FA Cup as many times as we have.
Qualifying for the Champions League without ever winning a trophy is a false economy. Big Clubs win trophies. Arsenal are a rarity among the Champions League regulars in that we haven't won anything in years. The importance of being in it must be called in to question when we can't hold on to our best players, or come close to winning it, year on year. Robin Van Persie might not have left Arsenal had we been genuinely challenging for trophies (though that remains open to question). Apart from one Final appearance in 2006 the Champions League has simply provided Arsenal with the opportunity to lose to Europe's elite (and Liverpool and Chelsea) every time Spring comes around. Now call me old fashioned, but I'd gladly forego that crap if it meant we were in with a shout of actually getting our hands on a real piece of silverware come May every season. Wenger has really upset me, and plenty of other regular match attendees, with his comments today. It's just yet another reason to want him out of the Manager's job.