Frank McLintock is coming to town

Arsenal Dover will come together tomorrow in celebration of The Arsenal


Tomorrow marks one of THE events in the calendar of the local Gooners in South-East Kent. The annual Dover Gooners Legends Lunch is to take place for the ninth time. What started out as a casual Christmas meal among friends in the upstairs room of a Dover pub has become a major attraction with over 170 members of Arsenal Dover sitting down to lunch with yet another Arsenal Great. Since Perry Groves joined us for the first of these more formal events in 2004 (and was joined by the gold Premier League trophy awarded to Arsenal for the Invincibles season) we have heard from Charlie George, Eddie Kelly, Sammy Nelson, Terry Neill, Nigel Winterburn and Bob Wilson (Charlie and Eddie also returned for an encore last year after the expected speaker, Kenny Sansom, let us down at the last minute). We also welcomed the FA Cup to Dover in 2005 thanks to Arsenal bringing it down for the day.
Over the years we have had guests from Austria, Norway, Italy, Germany, USA and Canada all travelling to Dover to join the frivolities. One of the features of the day is the charity raffle which always includes unique Arsenal memorabilia. The raffle was originally held in aid of Arsenal's chosen charity of any given year and saw us present cheques to the David Rocastle Foundation, Childline and Teenage Cancer Trust. Alongside that has always been fund raising for Bob Wilson's Willow Foundation, and now the raffle is conducted with the sole purpose of raising money for Willow. If you are unaware of what Willow does then please visit this website - www.willowfoundation.org.uk . Alternatively I would suggest you purchase yourselves Bob Wilson's autobiography and read his personal account of why he and his wife Megs set up the charity in honour of their daughter, Anna.


Tomorrow we will be welcoming one of the greatest figures in the illustrious history of our amazing football club. Legends come in many forms, from the cult figures like Perry Groves to the bona fide heroes like Charlie George. There can be no doubt that Frank McLintock sits near the very top of the latter category. 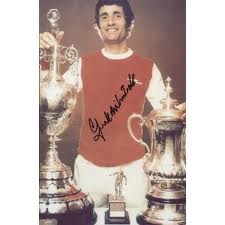 Frank with the spoils of glory in 1971


All Gooners will know that Frank McLintock was the Captain of the 1970-71 Double winning Arsenal team. To many he is the greatest, most inspirational, skipper in the history of Arsenal FC. Having listened to a number of his peers over these past few years it is clear that he is held in the highest esteem by the players he led. Bob Wilson could never be more effusive in his praise of someone than when he talks of "our Captain, Frank".
For someone like my Dad it will be a particularly gratifying day tomorrow, I'm sure. He still rates the Fairs Cup as the greatest night Highbury ever saw. Many years ago he was shocked by a late night phone call from Frank who was in a bar with by brother following a similar dinner. Tomorrow he'll be sitting next to the Great Man as Chairman of Arsenal Dover. It promises to be a great day and Frank will, no doubt, be giving us plenty of stories from his playing days, as well as his views on the way things are at Arsenal today.
I will try and write a piece tomorrow evening with some of what Frank has had to say, and to let you know how much was raised on the day for Willow.