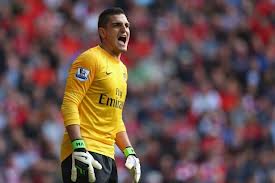 Blame the Manager, not the goalkeeper


That wasn't exactly worth waiting for, was it? I've been on nights this week, hence the lack of output on this site. I know it was international week and normally that would mean a quiet time here in any case. As it was there was plenty to talk about this week with various things going on around Arsenal and with the Arsenal players. One of the things I would have written about was the way a very strong "Reserve" side got beaten 2-0 by a very young Chelsea team the other day at London Colney. It struck me that such a result could only have been gained by a lot of the Arsenal players going through the motions and not applying themselves. It makes me question the desire of those players who should be trying to force their way in to the first-team that they obviously didn't try against Chelsea. To see the performance of those currently in the first-team at Norwich this evening you begin to realise that it may be an all pervasive problem at the Club.
We've done some good things away from home this season including great wins at Liverpool and West Ham and a draw at Man City in a game we were unlucky not to win. Today was the complete opposite of all of those games. There was no pressure on the opposition, no pace to our attacking play, and no ideas in possession. Last season was littered with defeats and insipid displays against the very worst of the dross that inhabits the lower reaches of the Premier League. Who remembers losing to Blackburn and QPR and Wigan last season? I certainly do. It seems that the Arsenal players have no recollection of how each of those games were lost. In the games at City and Anfield and West Ham we put in the necessary effort to out play our opponents. Today there was none of that. We were simply not trying hard enough against a very poor opposition. Norwich, as a result, were more than worthy of their victory.
Vito Mannone is going to be the one getting the stick tonight, I am sure. I am not surprised he made an error that led to a goal. Ultimately Vito is the third choice goalkeeper at Arsenal. The only reason he is even in there making an error is because Arsene Wenger failed to sign a goalkeeper over the Summer that was capable of challenging/replacing Wojciech Szczesny. I don't blame Vito Mannone for anything tonight as it's simply not his fault that he's playing. Also, before the ball even got to Mannone there was nobody closing down in midfield. We let an opponent have a clear shot at goal from 25 yards. After that Andre Santos was out of position as usual, and playing Grant Holt onside. There are far more senior and far more capable players than Vito that can be blamed for Norwich's winner and, most of all, there is a Manager who has failed to do his job.
Going back to the manner of Arsenal's play I will criticise the Manager again. In my opinion a footballer should need nobody to motivate him in any game he plays. However, that's not how it is in the real World. If it was then Manager's would be of little significance. The fact is that those players tonight were not sufficiently "up" for playing the game against Norwich. The worrying aspect is that, when you take in to account what I said about games last season, this is not a one off. Wenger is consistently failing to rouse his side when it comes to playing against "lesser" opposition. It says plenty about the character of our players, and significantly more about the way Wenger is managing Arsenal.

I'll write some more about the way the game went at some point tomorrow, after I've calmed down a bit.
Posted by DvbrisG at Saturday, October 20, 2012