Arsenal have some grovelling to do - Schalke 04 (h) preview 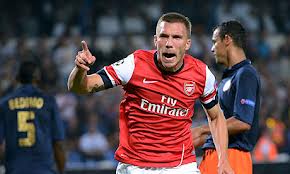 Time to give this man 90 minutes


After Saturday's debacle at Norwich the Arsenal players have to get back on the horse very quickly against top class opponents from Germany tomorrow night. Schalke are in decent form following their win against Champions Borussia Dortmund the other night. Their fans also put in some preparation for the visit to London with a riot involving 200 arrests and the hospitalisation of 8 police officers! Make no mistake, if Arsenal play anything like they did at Carrow Road then we will get absolutely splatted by Schalke.
The team news is as expected, though Laurent Koscielny is apparently back to fitness. I thought Mertesacker had his first poor game of the season on Saturday (he wasn't alone) and it would not surprise me if Wenger left him out. We'll be coming up against Klaas Jan Huntelaar tomorrow, a man I slagged mercilessly over the Summer, and I fully expect him to make me look even more stupid tomorrow. Who is best to shackle the Dutchman? Personally I would be in favour of a Mertesacker/Koscielny partnership, but there is no way Wenger will leave out Thomas Vermaelen - he simply doesn't have the balls to go dropping his Captain.
Midfield provides an interesting situation tomorrow. Aaron Ramsey has gone about three steps backwards since his display at Manchester City and could easily find himself out of the side if there were a few other options. Those who would choose to overlook the importance of Abou Diaby to this team might like to note the downturn in midfield dominance since his latest injury. With Wilshere not yet ready, Frimpong seemingly down the pecking order and Oxlade-Chamberlain out injured there is only really Francis Coquelin who could replace Ramsey. I would certainly put Coquelin in tomorrow night, and Arsene might well do the same but he might also simply move Ramsey to the right wing.
Up front remains the conundrum of Olivier Giroud. Again with more options he would almost certainly be out of the side. Unfortunately we have only Gervinho, who seems to have reverted to being the player we saw last season all of a sudden, that Wenger seems interested in playing there. Marouane Chamakh remains an Arsenal player in name only though, in truth, the similarities with Giroud are hard to overlook. Such is the problem that has been created by not signing someone to actually bolster the squad after Van Persie was sold that this is where we find ourselves.
Lukas Podolski is the other man almost certain to start tomorrow. I just wish he would be given the chance to finish a game. Podolski is yet to get through the full ninety minutes since joining us. In a game where we are comfortably ahead I can always understand offering a breather to your big players. What I don't get is why you would continually take off the only man in the side with the ability to put away a half-chance. Against Chelsea, and again on Saturday, I found myself staring in disbelief as Lukas Podolski was substituted in the second half while Arsenal were losing by the odd goal. Let me tell you now that Podolski would not have missed the injury time open goal that Giroud did against Chelsea. He might also have got on the end of one of the knock downs provided by Giroud late on against Norwich. I find it bizarre and I find it annoying. He would also provide the opportunity to switch formation in a game where we are struggling by offering some much needed support to the central striker in a two man front line. I can't see Podolski continuing to accept being taken off every week, especially if the side is clearly in need of his obvious goal threat.
With a substitutes bench likely to be slightly under strength again tomorrow there is a lot of onus on those in the starting eleven to get the job done. I don't see too many game changing players among our possible replacements tomorrow should things start to go wrong - you can't go relying on 17 year-olds like Serge Gnabry to come on and perform a miracle for you, even if he is an exceptional talent.
I hope to write the match review piece at some point on Thursday. I'm going straight to the game from work tomorrow, so I'm hoping for a quick getaway and a fog free journey. I'm also hoping for the 3 points that should see us with one foot in the second round.