Szczesny back? Gnabry, Meade and Eisfeld in mix - Reading (a) preview 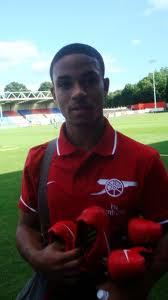 
With Jack Wilshere having made his comeback on Saturday against QPR he will now not be involved in the game that means nothing to Arsene Wenger. Even a look at what will, no doubt, be an away end packed out by half-term travelling Gooners will not convince Wenger of the importance to supporters of every single match. In the absence of Wilshere Arsenal’s midfield will seem somewhat weaker than it might have at the Madejski.
The U21 team played at Blackburn tonight with a team considerably weaker than that which beat Everton last week. Martyn Angha, having debuted at home to Coventry in the previous round, appears to be out of the side for tomorrow having started for the youngsters. Aside from that the 18 must virtually pick itself for Arsenal, and I’ve tried to name a possible squad below.
I notice that Arsenal Player carried an interview with Damian Martinez today talking about his hopes ahead of the Reading game. Interestingly there are also pictures of the squad in training for tomorrow and Wojciech Szczesny is with them (but there is no sign of Martinez in the slides). It comes as no surprise that he is back in training ahead of the Man Utd game, and I would suggest the chance to get 90 minutes in the League Cup before we go to Old Trafford would be very useful for the Pole. It’s something worth noting that he played only one pre-season game and just the first Premier League match before being injured, and then his aborted comeback from that injury against Southampton. That means that since the end of last season he has played just three-and-a-half matches, including the game in which he was sent off at Euro 2012. At the very least Szczesny could be said to be “out of practice”, so an appearance before facing Rooney and Van Persie and co should be compulsory, in my view.
Taking in to account the photographs from today, and what else might be available I think this could be (roughly) the squad for tomorrow:


It’s very much back to the weaker mix and match teams we are used to for League Cup action. I suspect Alex Oxlade Chamberlain might also have been involved if 100% fit, but there is no way I can see Wenger risking a setback for The Ox ahead of the United fixture.
Once again I will be missing the game tonight and having to Sky+ the live pictures due to work. My eldest is going to his first ever away game and it’s a shame I won’t be there with him to enjoy it – credit to Reading who have reduced ticket prices and put a family enclosure area in the away end. Hopefully we’ll all be looking forward to a quarter-final when I next write, but Arsene Wenger will be more than pleased if we’re not, and that is very disappointing.
Posted by DvbrisG at Monday, October 29, 2012