A brief summary from Sunday, Can we now ditch Nike, please? 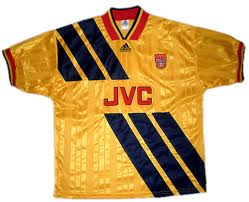 Time to get back to this sort of quality


It's been two days since the tour of Asia came to an end for Arsenal. I didn't get around to posting about the game against FC Kitchee Hong Kong as I went out to work almost as soon as it finished. Suffice to say that the players came close to a very embarrassing defeat. The way Arsenal defended in the first-half wouldn't have looked out of place in a Sunday League game in the local park. There was no midfield protection (Coquelin has looked way off the pace on this tour) and Djourou, Miquel, Gibbs and Eastmond were often out of position (Gibbs was always in the wrong place). The second-half wasn't much better with Andre Santos looking as far removed from a quality full-back as it is possible to be. I like Santos, but however good he may be on the ball I sort of prefer my defenders to know their own role first and foremost. The quality of the opposition can be summed up by the fact that Theo Walcott was head and shoulders above every other player on the pitch. I don't know how successful the tour was commercially, but from a football perspective there are a lot of question marks over the Arsenal squad. Arsene Wenger has now said that some of his defenders are not up to Premier League quality. You don't say, Arsene. However, I still only see us linked with lightweight Spanish midfielders, rather than quality defenders. No surprises there.

For the second year in a row Arsenal have been forced to announce that part of the new kit will not be ready for sale in time for the official launch date. As with last year the Club is laying the blame on their manufacturer. Here is the main part of the official statement:


Arsenal regrets to inform supporters that all adult and junior 2012/13 black away shorts will not be available in time for the official away kit launch date of August 9.
This is due to unforeseen problems with the Club’s manufacturers which we are working hard to rectify. The black away shorts are likely to be delivered at the end of September.

The end of September?! This is about as bad as things have become with Nike. Not only are we saddled with all the colours of the rainbow for our away kits (when most fans simply want a yellow and blue design) we are not even able to get hold of it until way in to the season. Regular readers will know that I am not buying the new away shirt as it is the most hideous thing I've ever seen from Arsenal. However, that is not to say that many other people are doing the same thing.
As many will know, Nike were able to get themselves a very long contract, for not a lot of money, when Arsenal had to get cash in quickly to deal with the stadium loans. I find it hard to believe that their failure to deliver over the past two years doesn't put them in breech of that contract. If it doesn't then it was very poorly written and negotiated (another black mark against Keith Edelman and his staff).
There were rumours a couple of weeks back that Arsenal were set to sign a deal with Adidas. Given this latest cock-up by Nike I would hope that Mr Gazidis is telling them where they can stick their sponsorship and getting things moving with the German sportswear brand. Adidas always did produce the best Arsenal shirts, and now is the time to bring them back (and they NEVER gave us an away shirt that wasn't yellow and blue!)

I'll try and get back to some normality on the site over the next week or so. I'm now on leave from work for a fortnight, and spending some time at the Olympics, so I can't promise anything in that regard. This afternoon I'm off to Wembley for South Korea v Gabon, and a chance to see Ju Young Park in action. Yesterday I was at Olympic Park for some hockey, and it was a truly memorable day. I have a couple more events to attend, including athletics and boxing - the whole thing really is very exciting. All we need now is for Great Britain to win a couple of gold medals - maybe today is the day.
Posted by DvbrisG at Wednesday, August 01, 2012