A new look for a new season, His name is Ryo and he may be gone for good 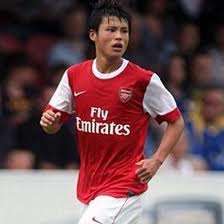 Ryo - have we seen the last of him?


As you will see from the evidence staring you in the face I have changed the look of the site ahead of the new season. I've played around with a lot of different looks for It's MY Arsenal Opinion, and this is the one I've gone for. The layout is almost identical to before, but the background and colour-scheme are quite a bit different. Art and design has never been a strong point for me, so I don't know if the aesthetics of the site will be something readers are keen on. I'd be grateful for any feedback you want to give me - if you don't like it then I want to know and I will revert to what we had before. Let me know in the comments section, or on Facebook (It's MY Arsenal Opinion) or on Twitter via @ARSENALDvbrisG. Generally I don't think it hurts to freshen things up a bit, but I drew the line at a purple and black background. It's a shame the Club didn't do the same thing with the new away kit this season.

Yesterday Ryo Miyaichi went off to join Wigan on a season long loan. This follows his spell at Bolton for the second half of last term. The young Japanese started well at Wanderers but, as their situation got more desperate, so he was used less. The need for pragmatism, over inexperienced style, was apparent. I'm sure that Ryo would have been looking to have much more involvement at Arsenal this year. However, he failed to impress in his two appearances on the tour of Asia. In fact he looked like he'd gone backwards from the same stage last pre-season. He had been called up by Japan in May, but was then surprisingly omitted from their Olympic squad. Did this affect his confidence?
Having been left off the list for the first-team trip to Germany it was obvious that Ryo was not in Arsene Wenger's plans for this season. He was effectively replaced in the travelling party by Serge Gnarby, and this was after Thomas Eisfeld had laid down his own marker in Malaysia and Hong Kong. The question for Ryo now is, will he be back? It's fair to say that, if former precedent is anything to go by, then perhaps not.
If there is something to cling to for Miyaichi it is that Arsene has loaned him in to the care of a Manager with very much the same ethos. He has also been loaned to a Club in the Premier League - this puts him a step ahead of the likes of Henri Lansbury, who have been consistently farmed out to lower division sides. If he can have a real impact on the improving Wigan team then the future may yet be bright for Ryo Miyaichi. I certainly hope that's the case. When I saw him make his debut against Bolton I was surprised and excited by his pace. He needs to gain some physical strength to compete at this level, but that is not a surprise given his background before arriving in England. It has been a major step up in quality. This season will be make or break. Good luck Ryo.

I'll be putting up the annual Premier League season preview on Friday evening, along with the preview of the Sunderland game - work will prevent me from doing anything between now and then, regardless of signings or departures. The excitement is building.
Posted by DvbrisG at Tuesday, August 14, 2012