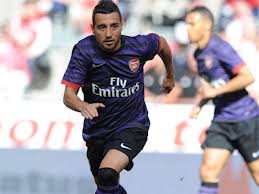 
Arsenal's first-half display in Cologne yesterday was a joy to watch. It may only have been a friendly against pretty average opponents, but the attacking football was of the highest order. Cynics will point to two of the goals coming from dead ball situations, but that would be to ignore the dynamic approach of Arsenal's players.
It was an interesting Arsenal line-up. I was pleased to see Alex Oxlade-Chamberlain once again used in the centre of midfield. He may only be a youngster, but I believe we'd be wasting his talent if he kept playing out wide. His physical strength makes him more than capable of playing there in the Premier League, while his football ability and pace are a match for anyone. Yesterday he partnered Francis Coquelin, but the young Frenchman had another in and out kind of game. Alex Song's place against Sunderland on Saturday is not under any real threat. It just remains to be seen whether The Ox is fit enough to play, or whether Mikel Arteta or Abou Diaby come in instead (I can only assume that Arteta is carrying a knock at the moment as he was not involved yesterday).
The most impressive feature of yesterday was the combinations between Chamberlain, Theo Walcott and Santi Cazorla. The Spaniard was utterly outstanding on his debut for the Club. If first impressions count for anything then we are in for a treat with Cazorla. Obviously it will be a bit different against Premier League opposition (the trip to Stoke will no doubt see him "welcomed" to England). However, Cazorla showcased his significant talents against Cologne, and I can't wait to see him in action again. I suspect he will find himself on the bench on Saturday as he has to fly half way around the globe to play for Spain in midweek (I thought this particular international friendly week was supposed to have been dropped from this season?) Aaron Ramsey can learn a lot from watching and playing with Cazorla, but the Welshman might well start on Saturday ahead of the new boy.
Up front we got a first look at Olivier Giroud. I was really impressed with the way he got himself in to position in front of goal. I'm sure he would admit that he could, and should, have had one or two goals. If the way Arsenal tried to get crosses in is anything to go by then we will have a new dimension to our play this season. Time will tell whether or not Giroud will be more John Hartson, and less Kaba Diawara (if he turns out to be more like Alan Smith then we're on to a winner). One thing to note here is that certain players must work on their delivery (and I don't mean Walcott for a change). There is no point in Kieran Gibbs bombing forward if he is simply going to scuff his cross against the nearest defender.
The third of our new signings also impressed yesterday. Lukas Podolski scored twice against his former team. The second of his goals was quite brilliant. Podolski started the move with a lovely chipped pass for the onrushing Gibbs, before getting on the end of a perfect final ball from the left-back. The finish from Podolski was unstoppable. As with Cazorla, if he's given us a taste of things to come then the future is bright.
At the back we saw Per Mertesacker dominate the centre of defence. The moments of danger largely stemmed from Thomas Vermaelen dashing off in to midfield and chasing shadows, while Vito Mannone tried his hardest to get the Germans in to the game. I just don't understand why we haven't replaced Mannone and Fabianski with someone even vaguely competent in goal.
At right-back Nico Yennaris got his chance, and I don't see any reason why he shouldn't be playing ahead of Carl Jenkinson until Bacary Sagna is fit to return - one reverse pass to Theo Walcott was sublime, while his defensive play is so much better than Jenkinson.

The second-half was less impressive from an almost entirely different team. Gervinho scored himself an excellent solo goal, before showing how bad he can be in front of goal by failing to convert Andrei Arshavin's only moment of brilliance. In terms of action the second-half didn't have all that much going for it. Laurent Koscielny was lucky not to have a penalty given against him for shirt-pulling, while Serge Gnarby put down a marker for League Cup duty this season - the youngster looks strong and quick.
Things got lively, of course, with the introduction of Robin Van Persie. I had spent the second-half looking to see who was wearing the armband. I had assumed it must be Johan Djourou as his was the only arm I hadn't seen properly. Then Van Persie appeared at the touchline and he was the man wearing it. I have to say I was utterly disgusted. Robin Van Persie has stated his differences with Arsenal. I fail to see how the Manager can allow this man to continue to be the Captain of our Club, regardless of whether he stays. What message is it sending to the squad? There is no difference between Van Persie's public statements, and those of William Gallas. Gallas was stripped of the Captaincy, so why not Van Persie?
It's fair to say that not all those Arsenal fans present in Cologne gave Van Persie a warm reception. In fact there was a fair bit of booing. Some of those in attendance are quick to point out that this was mainly from our East European brethren, who are wont to turn up on the Summer jaunts to the Continent. The bulk of regulars treated Van Persie's arrival with the apathy he deserves - their silence at his introduction was far more to my tastes. I do not condone the booing of any player wearing the Arsenal shirt - it is of no good to anybody. However, I will never sing Van Persie's name, nor cheer his presence on the pitch for Arsenal ever again. I will simply choose to ignore him. I will celebrate if he scores, of course, but that would be a goal for Arsenal, not for Robin Van Persie. To anyone who wants to boo him I would say that you should go and watch your football elsewhere.
I notice that The Sun has chosen to concentrate on Van Persie's reception in their report today (Antony Kastrinakis is an Arsenal hating cretin of the highest order). This doesn't surprise me. You can be sure that, had a Manchester United or Liverpool player made a debut like Santi Cazorla or Lukas Podolski then they would have been the main feature of the report. Not so for Arsenal. The Sun has form for this - back in 1995 Dennis Bergkamp got a couple of goals on the first match of a Scandinavian tour (he'd already got a hat-trick in his first friendly at St Albans) but the focus of the piece was Ian Wright being taken off by Bruce Rioch after getting booked. If Podolski or Cazorla go on to be crowd favourites like Bergkamp then nobody will be complaining.
Posted by DvbrisG at Monday, August 13, 2012