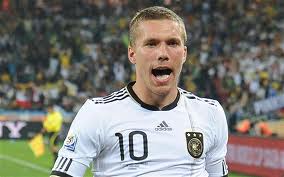 Podolski - not shown us his best


Italy gave the Germans a bit of a lesson last night. I have to say I was very disappointed with Germany. I picked them as my likely winners before the tournament and, as in South Africa two years ago, they played the most exciting football of any team in the tournament. I thought that, with two years more experience, they would be able to go that extra mile and see off all comers. As it turned out they were afflicted with Bayern Munich syndrome and bottled it on the big occasion. The decision to leave out Thomas Mueller was an odd one, and it certainly didn't work out well. I think the first Italian goal might have been averted had Mertesacker been alongside Badstuber - Hummels was beaten far too easily in the build up to Balotelli's first goal. However, that was the first time the pair had been troubled during the tournament.
With Germany out so Arsenal's interest in Euro 2012 comes to an end. It's fair to say that it hasn't been a vintage tournament for the Arsenal players involved. I think most Gooners were looking forward to getting a good look at Lukas Podolski. As it has turned out our new signing has failed to show his best form. It was no surprise when Joachim Low gave him the hook at half-time last night. He has looked pretty out of sorts in every game. Arsene Wenger claimed last week that Podolski had been playing well in Germany's matches, but I think he was fooling nobody. Hopefully he will now go and get a good holiday and come to Arsenal ready to impress. Per Mertesacker, meanwhile, should come back fighting fit having, effectively, done his pre-season already. I like the BFG a lot, and his lack of pace is unfairly highlighted when put against his excellent reading of the game. If I have a criticism of Mertesacker it is that he fails to attack the ball in the air - something that Steve Bould must get to work on.
As far as the Final of Euro 2012 goes I hope Italy wipe the floor with boring, boring Spain on Sunday. Quite apart from the fact that Spain have a former Arsenal Captain who refused to play for us last Summer, I can't stand the incessant square passing. Football snobs may still rave about the possession play of Spain, but when you pick a team with no centre-forward then your ambition to score goals must be called in to question. If Pirlo continues his form (he is far and away the player of the tournament) and Balotelli is up for it then Italy can win. I'm sure they would be popular victors. Forza Italia!

Two weeks tomorrow sees Arsenal return to action in the Markus Liebherr Cup at Southampton. It is a gentle start, involving two 45 minute games. I was pleased to see that Scottish Third Division side Rangers have been replaced with a European name - RSC Anderlecht. I had decided not to go to Southampton when Rangers were supposed to be there because of the general behaviour of their supporters. The fact that Anderlecht are now in place has changed my mind and I will be there for the start of the campaign after all.
It will be interesting to see who lines up for Arsenal in the two games. A number of people who might not be here after August 31st will be back in training with the Club. We will also have the likes of Thomas Vermaelen available, along with Mikel Arteta, Kieran Gibbs and Andre Santos. Aaron Ramsey and Ju Young Park will probably not be around due to Olympic involvement. The main source of excitement, for me, is that Jack Wilshere might put in an appearance, assuming his knee surgery was as minor as Arsenal told us at the time.
With Euro 2012 coming to an end the focus very much switches back to Club football. I am really quite excited already about the thought of watching Arsenal again. Nothing beats it, does it?