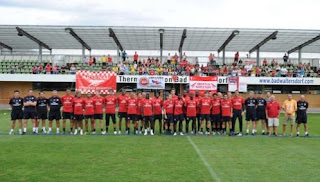 Pre-season Gooners want some of this


I'm going to keep this as brief as I possibly can as it's late in the evening and I have to be up outrageously early for work in the morning. I can't comment on the Czech Republic game this afternoon as I haven't seen it, though I believe Tomas Rosicky may have suffered an Achilles injury - something for Gooners to worry about.
As far as England go I will make a few observations.

1. Alex Oxlade-Chamberlain was the highlight for England.
2. Joe Hart is proving week after week that he is extremely overrated.
3. Scott Parker is injured and shouldn't be playing.
4. Andy Carroll should have been brought on to help Welbeck as Ashley Young lacks sufficient ability to play through the centre.
5. James Milner is too slow to play out wide in any team.
6. If England are going to play this way they must hit teams on the break with pace - that means bringing in Theo Walcott, or playing Young out wide, and getting Hart to release the ball quickly.

All in all it wasn't such a bad performance from England. It might have lacked excitement from start to finish, but that might just be the way in which England finally get some success. Their next two games will be really tough - they have a bad record against Sweden, and Ukraine served notice last night that they intend to make the most of their own tournament.

I've just watched Russia's second game before sitting down to write this. Once again Arshavin was to the fore through most of the game. However, the Poland goal came directly after he misplaced a lazy pass which might have won the game for Russia had it been played properly. It was more than vaguely reminiscent of many incidents we've seen at Arsenal these past two years.
I've read a lot over the past few days of how Arshavin's performances for Russia are because he gets to play in his preferred position, behind the striker. I would implore every fool writing this nonsense to watch Russia play and see that Arshavin most definitely plays on the left-wing for his country. If he appears to be playing better for them than for us, it is simply that he is trying when he plays for Russia, and not when he plays for Arsenal.

In terms of Arsenal news there is some concern about the plans for pre-season. It now seems likely that the friendly Arsenal announced for Nigeria is about to be cancelled. It always seemed like a ridiculously stupid idea, and now Arsenal have finally caught on to the fact that they will not be playing in Abuja or Lagos after all. There are rumours of a possible game at the Camp Nou against Barcelona, but I would rather we didn't go and play them at all - we owe them nothing whatsoever, so why honour them with our presence in pre-season?
If the Nigeria game doesn't go ahead then we will have a hole in the preparations for next season. A friendly will no doubt be arranged, whether it be in Barcelona or anywhere else, but it will also open up the chance for a trip to Austria, which would certainly be something Arsene Wenger will push for. I know for a fact that any trip to Bad Waltersdorf would be very popular with the pre-season Gooners. I might even pop along myself if I can get some leave.
Posted by DvbrisG at Tuesday, June 12, 2012