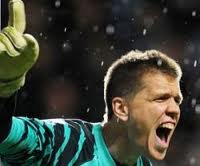 Szczesny - it's becoming a problem


Yesterday was the second anniversary of this site. I started writing in the week that the South Africa World Cup began. I'm rather pleased with how it's gone since. I am also pleased that Euro 2012 started yesterday, giving me a subject for the piece this morning.
As I said in Thursday's preview I will be concentrating on the Arsenal players involved in the tournament, and there were plenty of them in the games yesterday with Wojciech Szczesny, Tomas Rosicky and Andrey Arshavin all playing on day one. Two of the Arsenal players ended up being among the key men in the opening matches, with very differing fortunes.

I wrote on Thursday that I was worried about Wojciech Szczesny and his record in big games for Arsenal. I questioned how he would perform in the spotlight of Poland's opening match on home soil, with all the attendant pressures that would bring. Szczesny is very young, obviously, but his tendency to be at fault in pressure matches is disturbing. You can take the Carling Cup Final, the North London Derby at Spurs' place last season, or the must-win games against Norwich and West Brom at the end of the campaign. In each of those you will find him at fault for goals. Don't get me wrong, all goalkeepers make mistakes. It's just that the very best ones don't make too many, and they don't often make them when it really matters. Yesterday was a game we can add to Szczesny's growing list of bottle jobs.
I think we all know that Wojciech carries himself off as this confident, probably arrogant, footballer. I am beginning to suspect that the bravado is nothing more than a mask for a very insecure individual. His performance yesterday really betrayed a very nervous disposition. He had nothing to do until early in the second-half. What happened next? He came for a cross and got nowhere near it, allowing the Greeks to equalise. His next action was to foul an opposition striker in the penalty area and get sent-off. It was rash from Szczesny, reminiscent of a dash from goal that he made in the 3-3 draw at Tottenham last year - that also resulted in a penalty. If you want to argue that it is not an issue with his temperament, then I would contend that he has an alternative issue with not learning from his mistakes. Either way, it is a problem Arsenal must address.
The TV people were saying how Szczesny is lucky that his replacement saved the resulting penalty, and that he will be back for the third group game. I'm not so sure he will. If Poland's reserve keeper performs well then Wojciech may be sitting out the rest of the campaign. It might just do him some good. I remember Iker Casillas being dropped by Real Madrid having come through as a very young goalkeeper. He got back in when his replacement went off injured in the European Cup Final at Hampden Park. Casillas has never looked back. Maybe Szczesny needs that kind of treatment too.
In among all of this stuff about Szczesny I have to spare a thought for Lukasz Fabianski. Our other Pole had been outstanding in a warm-up match for Poland, and secured his place as Szczesny's understudy. Two days later he injured his shoulder in training and was ruled out. Had that not happened it would have been him coming on with to face the penalty. He would have had the chance to step out of Szczesny's considerable shadow, and put himself in the shop window for the transfer he wants this Summer away from Arsenal. It's a real shame for Fabianski that he was robbed of his opportunity by injury - just as he was when enjoying his best spell at Arsenal.

In the later game Russia dismantled Czech Republic. I thought Tomas Rosicky was lively enough for the Czech's, but didn't run at people as he has for Arsenal recently. I wonder if he is not really fit having been ruled out of their warm-up matches. He was unlucky with a couple of efforts at goal, but all in all his side were thrashed by the Russians.
The star of the Russian show was a certain Andrey Arshavin. It was a display reminiscent of those four years ago that first brought him to the attention of fans in England. For an Arsenal supporter it was a frustrating illustration of how he wasn't remotely interested in being at the Club over the past two years. Some argue that he is playing in his best position for Russia, so it's not surprising he wants to play better for them. People use that as a stick to beat the Arsenal Manager, on the grounds that he didn't treat Arshavin properly by not playing him where he wants to play. I can understand that, but it doesn't excuse a professional footballer being physically unfit and lazy on the pitch. However much you don't want to play on the wing, you are being paid to put in the necessary effort for the fans.
Arshavin's displays on the big occasion, when he knows there is a massive audience, tell us plenty about his character. We all know he is a World-Class footballer. But there's no point in having him in your team if he only feels like displaying his true talent when he sees the shop window in front of him. The fact that such a limited footballer as Theo Walcott can get in the Arsenal team ahead of a supreme talent like Arshavin is purely down to attitude. Arshavin no longer wanted to make an impression at Arsenal, so he stopped performing - unless we were playing Barcelona, for example. Now he is looking for a transfer away, and the Euros provide him with a perfect stage to showcase his ability. It's not really a surprise that he turned in a virtuoso display, is it?

Today we've got Holland, Denmark, Portugal and Germany in action in THE group of the tournament. There is plenty of Arsenal interest in the shape of Van Persie, Bendtner, Mertesacker and Podolski. Such is the anticipation of this group that we can probably look forward to a disappointing snooze-fest following yesterday's excitement. I'll try and comment on those matches tomorrow evening, as well as previewing England v France. Enjoy the football today.
Posted by DvbrisG at Saturday, June 09, 2012