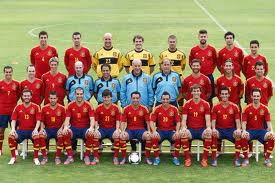 Spain - brilliant when they entertain


Spain finally stepped up to the plate last night and decided to entertain Europe. The performance against Italy showcased Spanish football at its very best, with the technical skill on show simply second to none. It was a fitting end to the best international tournament since France '98.
I have been particularly scathing about Spain over the past three weeks. I stick by every word I have said. Until last night Spain played a brand of keep ball that suffocated the game. There was little attempt to score goals, with the exception of their game against a Football League standard Ireland team. I was getting annoyed last night with all these smug know-alls on Twitter and the like having a go at people like me. These people deliberately overlooked the fact that Spain played a completely different style of football last night. Instead of the constant sideways passing there was an intent to destroy Italy. Compared to their other games it was chalk and cheese, and it couldn't have been more entertaining to watch.
In order to underline my point about the change in style from Spain I want to highlight the fact that Italy had more possession in the first-half - Spain were more carefree with the ball as they tried to create chances, rather than play keep-ball. Italy also had eleven shots at goal, and Cassillas was as busy as he has been in the last three international tournaments. It all made for a real spectacle.
Let me make the point that I have no problem with the way Spain played in the earlier games, other than a wish to be entertained more. Good football is winning football. If you are winning then you should make no apology for how you do it. However, that is not to say that people are not entitled to criticise. I well remember how Arsenal under George Graham were castigated for being "boring", but no Gooner cared as we were winning trophies (actually, until near to the end of Graham's reign we were far from boring). Anyone who claims to have actively enjoyed Spain's play until last night is either lying or is an out and out football snob. The reason Germany and Italy grew in popularity during the tournament was because they played football with intent to score goals. They attacked at pace and tried to get in behind the opposition. Last night Spain came to the party, and did it better than any of them.
It's probably a shame that such a great side got the stick it did during this tournament. Thankfully, what will remain in the memory will not be the boring pass, pass, pass with no shots. What will be remembered is the glorious attacking play of last night. I just wish we'd seen it sooner.

As much as I am not a fan of international football, I can't deny that a Summer tournament is the perfect distraction from a lack of Arsenal action. Apart from anything else there is less transfer rubbish in the newspapers as there is something else to concentrate on. With the players back for pre-season next week we can now get back to Arsenal. The blog will now return to normal, with a concentration on what really matters.
Posted by DvbrisG at Monday, July 02, 2012