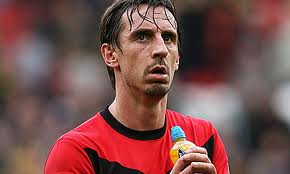 
Let's start by getting something straight. I don't really like Gary Neville. I despise the weasel-faced little scumbag with a passion. When he was on the pitch against Arsenal you knew that his main tactic would involve kicking whichever Arsenal player was up against him and then attempting to referee the game. All of this would be done, throughout his career, without even coming close to a red card against us. I was at Old Trafford the day we were robbed of our long unbeaten run. The way in which Neville and his, even uglier, brother carried out a systematic assault on Jose Antonio Reyes will always live with me. Clearly carrying out a plan made by Ferguson the ugly sisters were permitted by Mike Riley to kick Reyes (the best player in the Premier League at that time) out of the match. Reyes never recovered from the scars of that day. From then on I hated Neville more and more until the day he retired. I always considered him over-rated. I have never understood how he won so many England caps, while Lee Dixon got just 22 of them (his brother even got more than Dixon for God's sake!) Patrick Vieira also hated the horrible little toad and famously pinned him to a wall in the Highbury tunnel before the game in early 2005. He deserved it in every way.
Given what I've written above you're probably wondering why I have titled this post in the way I have. The reason is that, since he gave up playing football, Gary Neville has been working on Sky and doing a damn fine job. Frankly he has been knocking spots off all their other pundits all season. Intelligent and erudite, as well as comical on occasion, I actually look forward to hearing what Neville has to say when I watch football on the box. Another positive is that his presence is gradually sidelining that malingering cretin Jamie Redknapp, and that is something for which we can all be grateful.
So why is Neville so much better than all the other pundits? In my view there are a couple of reasons for this. Firstly he has won everything in the game, so he is in a perfect position to actually give a forthright view on something, and be respected for doing so. I believe it's far easier to come across with credibility if you've been there, done it, and got the medals to prove it (although that clearly doesn't seem to apply in the case of Alan Hansen). The other reason for it, in my opinion, is that he played for a massive Club. Having been Captain of Manchester United, Neville does not suffer from the "jealousy syndrome" that jaundices the likes of Le Tissier, Burley, Townsend, Savage, Waddle and Shearer. These men all won next to nothing (Waddle's European Cup was "bought" by Bernard Tapie at Marseille) in their career, and never played at a genuinely big Club. It comes across in the way they are so spiteful in their assessments of certain players and the team's they play for. Just like the non-league centre-half in the FA Cup 3rd Round wants to kick Robin Van Persie or Wayne Rooney, simply because they're not them, so those mentioned above find any way to possible to criticise, simply because they weren't good enough (or ambitious enough in Le Tissier's case) to play for a big Club. Gary Neville, on the other hand, has no such axe to grind.
Some will moan about Gary Neville on TV on the grounds that he is biased towards Manchester United. Personally I haven't got a problem with that. The man is United through and through so you have to accept that he will be very much in their favour. Phil Thompson is the same with Liverpool, and Frank McLintock was the same with Arsenal. Not a problem. Having watched the AC Milan game back on telly from last week I was surprised at how Neville was willing Arsenal to get the job done. Fair play to him for that. I look forward to hearing a lot more from him over the coming years, and a lot less of Jamie Redknapp.
Posted by DvbrisG at Thursday, March 15, 2012