Special person has a special day 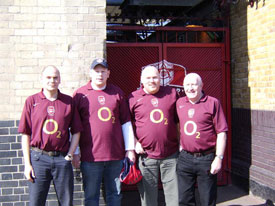 Dad with his boys outside Highbury, May 7th 2006

I tried to get this post written and published last night. Unfortunately my broadband provider gives a rubbish service which seems to want to die between 7pm and the early hours. As a result I'm only able to get it done now. I read a report last week that said TalkTalk are the most complained about broadband supplier and, frankly, I'm not surprised.

Why do I support Arsenal Football Club? The answer is simple - my Dad is an Arsenal supporter. I suspect that's true for most football fans as the baton is passed from generation to generation. Perhaps the only surprise is that my Dad is not a Londoner. Like me he has lived all his life in Dover. So how did he come to support Arsenal? I am always at pains to point out to people that Arsenal is Kent's biggest football club, having been formed in Woolwich, but that's not the reason. Dad started to follow the Club for the 1950 FA Cup Final. He had read in the newspaper FA Cup Final special supplement that morning how Arsenal would be wearing a special "old-gold" shirt for the game against Liverpool. Quite rightly he felt that Arsenal must be a very special Club indeed if they were able to wear a gold shirt and he was hooked from there on. He went on to see his first Arsenal game at The Valley in the early 1950's and has now been going to see the boys play for over 60 years. He used to go with his old friend, Bushy (the original Dover Gooner), but he sadly passed on and my eldest brother took his place in the East Upper with Dad.
I was very fortunate to be born to a Dad who was, and is, an Arsenal season ticket holder. He took me to my first game thirty years ago this year. Of all the many things my Dad has given me over the years I would suggest that Arsenal is the one I have had the most enjoyment from. Me and my brothers are season ticket holders too and we still travel to matches all together. My Dad boasts a very proud record of having been to see every Arsenal Cup Final since 1968 against Leeds, and then he took my cousin to see us lose to Swindon Town in 1969. He was at Highbury for what he considers its greatest moment when the Fairs Cup was won in 1970. I was sat next to him for my most favourite "in the flesh" moment when Tony Adams sealed the Title in 1998. I was also sat next to him for my saddest, the final day at Highbury, which is when the photo above was taken. Sadly, his friend of many years (and the man who sat next to him in the East Upper for nearly thirty years) Bob Everett was no longer with us by then, and he is missed by Dad to this day. He's taken me to Paris and Copenhagen and Wembley and Old Trafford and Anfield and Hillsborough and the list goes on. Triumph and disappointment with Arsenal, and the emotions that come with them, are all thanks to my Dad and the fact that he chose Arsenal as the team to support.
Having gone through those sixty years he certainly couldn't be deemed a glory-hunter, by any means. In recent years he has so enjoyed the Graham era and Wenger era team's, having sat through plenty of dross in the mid-70's and early-80's. He always felt it would take an incredible player to dislodge Brady as the greatest he has seen, and Dennis Bergkamp was that man. In Dad's eyes (and most people who genuinely know their Arsenal history) Dennis is the finest we've signed, and the finest we've watched. Unlike Dennis my Dad has been on Arsenal's European tour over the past twenty years. He's been to all points from Moscow and Kiev in the East, to La Coruna and Madrid in the West. In between he enjoyed his annual trip to Austria for pre-season where he got to meet the players, the Manager, and some of the nicest people he's come across in his sixty years with Arsenal. The likes of the legendary Andreas Kovacs and Teo Scarpellini have become firm family friends. When he finishes the book he's currently writing in his retirement it will be some read, you can be sure.
So why am I writing about my Dad today? Well, yesterday (when I was hoping to get this published) he turned 70. I owe a lot to my Dad, from all the usual stuff, to my love of (and former ability to play) cricket, and of course The Arsenal. It's amazing really that he still gets to every home game, and some of the away jaunts (though not as many as he would like!) He now gets to see his Grandsons taking their seat at matches and, once again, it's his following of Arsenal that has given them their names - Freddie, Liam and George. Like I say I owe a lot to my Dad, and so do my brothers. We wouldn't have Arsenal, and that common interest, without him.
Happy Birthday Dad, and thanks.