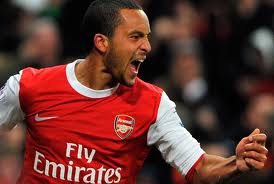 One of the worst things about being out of the cups is that the games don't come thick and fast. While this is a small advantage to Arsenal in that they can keep putting out the first-choice players (fitness permitting) it makes for some very boring times for us supporters. If you're playing twice a week in the Spring it means you're having a very good season. Having not played since last Monday there is no way the Arsenal players should be fatigued tomorrow evening. More on that game below.
Since I last wrote there really hasn't been much to say Arsenal-wise. That's why I haven't been writing anything. If there's nothing to give an opinion on then there is no point in writing for the sake of it. Of course there has been some football in the meantime, and my brother and his wife have been blessed with a baby girl, but nothing happening in the World of Arsenal. The main thing to have happened in football is, of course, the dramatic (but thankfully not tragic, we hope) scenes at Spurs on Saturday evening. Football and its followers get a lot of stick, but the reaction of those inside White Hart Lane the other night showed that, despite our obsessions with our Club's, rivalries can be put aside when needs must. Fabrice Muamba is, it seems, improving day by day, and thank God for that. He began at Arsenal, of course, and the reaction on Twitter of his ex-teammates, and those employed by Arsenal that worked with him, shows that Muamba is a genuinely popular young man. Good luck to him in his recovery.

Down to business then and I watched most of the Reserves encounter with Liverpool this afternoon as it was live on Liverpool TV. It was a decent game, marred by a terrible foul on Jernade Meade that could have easily broken his leg. The referee missed it completely (as he did most fouls on Arsenal players throughout the match) and then somehow only booked the assailant when his linesman drew his attention to the foul. Meade was able to continue after some treatment, but he told me on Twitter that he was in a bit of pain on the coach coming home, and not looking forward to how it will feel in the morning.
The Arsenal team today was notable for the inclusion of Abou Diaby, making his latest return from injury. Diaby got Arsenal's equaliser in the 1-1 draw with a tap-in from close range. Typically he managed to get kicked on the ankle in the act of scoring, but hopefully has come through his hour on the pitch generally unscathed. If, by some miracle, we could get him fit and keep him fit until the end of the season then Diaby could have a big part to play in the Premier League run-in. At the level he played today he was simply a class above, and Liverpool only got the ball off him when he misplaced the odd pass. With the ball at his feet Diaby was simply too skillful, too quick and too powerful for Liverpool's inexperienced midfielders to contain. But for some missed chances from the also returning Benik Afobe it could have been a deserved three points for the youngsters.

Tomorrow we get back to some real Arsenal action as the boys travel to Everton. We've had a decent record at Goodison Park in recent times, but that counts for very little. We've actually handed out a spanking or two to The Toffees in recent times, yet I still consider a trip to Goodison to be among the toughest fixtures of the season. Their results against the likes of Manchester City and Chelsea recently only serve to underline the task ahead of us tomorrow. Frankly, I'd take a draw right now.
The team news is that the same squad will be involved as was last Monday against Newcastle. I would think it unlikely that Arsene would look to change the starting line-up, though Andre Santos is knocking heavily on Kieran Gibbs' door. However, Gibbs has played reasonably well of late (though he let Ben Arfa beat him far too easily for the goal last week) and I don't see Wenger leaving him out just yet. Apart from that there's not too much to say about Arsenal's team. The only thing I will say, because I failed to mention it last week, is that I hope Theo Walcott will pick up where he left off last Monday. Against Newcastle I thought he was outstanding. Everything he did was first-rate, from controlling the ball, to running at his man, to his excellent crossing from wide (which led to both Arsenal goals) it was the most complete display of his career. I am one of Theo's biggest critics but if he can play like that on a regular basis then he might yet fulfil his potential. I'd love for Walcott to prove me and many others wrong by showing he is a footballer, and not just a sprinter.
Everton rested a lot of players for the Merseyside Derby last midweek, ahead of the FA Cup on Saturday. I was amazed that Moyes would choose to leave out his best players against Liverpool, of all teams. Given that they have to have a replay in the FA Cup I would rather hope he does the same thing tomorrow. If Everton were to field the same players as they did last Wednesday then I would fancy a committed Arsenal to beat them. We will see what happens, but we already know the dangerous Seamus Coleman will not be involved, which should be a slight relief to whoever gets the nod at left-back for Arsenal. I've been impressed (far more than I thought I would be) by Jelavic, while Stracqarlursi (don't know if I've spelt that right) looks the sort of whole-hearted trier that every Club would like to have in their squad. Whoever plays up front for them tomorrow Arsenal's centre-backs will have their work cut out.
I expect Arsenal to fall at least three points behind Tottenham again tomorrow. I can see them beating Stoke fairly comfortably at home (though 'Arry might rest a few) while, as I said before, I would take a draw in our game. I'm not concerned if that's the case. However, I would very much like to see Man City beat Chelsea. I don't care which of the Manchester sides wins the Title, but we need Chelsea to drop as many points as possible. If they were to lose tomorrow, and then only draw with Spurs this weekend, it would set them back again. I fear Fernando Torres may have found himself again, and that should worry us, but if we can get away from them over the next ten days then the future looks bright. Whatever happens, Arsenal must make sure of their own performances and results. The rest can then take care of itself.
Posted by DvbrisG at Tuesday, March 20, 2012