A different kind of Spring 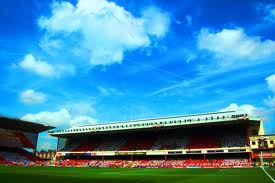 No finer sight than Highbury in the Sunshine


Isn't it just lovely to be winning games of football every week? Isn't it even lovelier to be winning games of football while the Sun is shining and the warmth is beating down on us? In recent years the beginning of Spring has coincided with the end of season capitulation of Arsenal. This season the players have suddenly hit their stride with the flowering of the crocuses. I don't know about you, but it has put me in a damned fine mood.
I didn't get to the game on Saturday as I was working all afternoon and evening. As a result my only coverage of the game has been Match Of The Day's "highlights". The combination of work, and not seeing enough of the game, is the reason for there being no preview or report from the match on here. I have to say that the BBC really did set new standards with their round-up on Saturday night. I checked the match stats after the game and I noticed that Villa had three shots in the entire game, and the reports I saw all spoke of the complete dominance of Arsenal. It came as no surprise, therefore, to see all three of those Villa efforts included in the edit. In fact, if you hadn't been there, seen it, or read reports, you could be forgiven for thinking Aston Villa were incredibly unlucky to lose 3-0 in such an evenly matched contest. It's frightening really, but I've come to expect nothing more from the inept fools running Match Of The Day.
The other result of interest on Saturday went our way yet again. I don't think I've ever known such a sustained period where things have gone our way so much. As a result we are now three points clear of the mugs from down the road but, more importantly, eight points ahead of Chelsea. If we can avoid defeat in most of our remaining games - in particular the one against Chelsea themselves - then we should finish at least fourth. Concentration is key, and an eighth successive win this weekend is paramount ahead of the visit of Manchester City. If we can win against QPR and then actually beat City then suddenly the runners-up spot could yet come in to play. Having said that, it's best not to get ahead of ourselves just yet - after all, that's what Spurs did and look what happened there.
If there is a frustration to be had within the context of our last seven Premier League matches, it is that we are too far adrift to be challenging for the Title. As great as it is to be winning at this time of the year, it's just not the same when you're not pushing for the main prize. In the past when we've got on a run at this stage I've found myself thinking about it all the time. I would just drift off, at school, at work, at home, in the car or wherever, and wonder if it was going to lead to the Title etc. I'd be unable to sleep at night from thinking about Arsenal and the League Title. It really takes me back to the good times when Highbury would be bathed in sunshine while Dennis and Freddie and Thierry and Bobby would be ripping sides apart, or when Rocky and Davo and Micky and Merse and Smudger were doing their stuff. I think it really hit me today that there is just that something missing. The reason it hit me is that I was on a training course and I realised that I was actually listening to what was being said. If we were pushing for the Premier League I would have been so pre-occupied in thinking about Arsenal that the course would have been going on around me. As it is I was taking in every word and, in a way, that's a real shame. Still, I'd rather be winning in Spring than losing, no matter where we are in the League. And the Sun is still shining.
More tomorrow.
Posted by DvbrisG at Monday, March 26, 2012