What I want from an Arsenal Captain 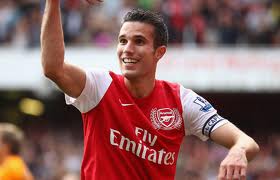 
Apologies for not writing a proper match review from another glorious night for Arsenal against Newcastle. I got back to my hotel from the game just after 11:30 on Monday evening, and then was up at 4:30 for work. After getting home yesterday I was absolutely knackered and couldn't bring myself the necessary motivation to write anything.
Did Robin Van Persie's behaviour spoil the Arsenal win for you on Monday night? No? Me neither. Yet again I find myself seriously annoyed with the coverage of Sky and the written press yesterday. Instead of glorying in another great finish to a Premier League game, with Arsenal's efforts winning the day over a side who came to waste as much time as possible, we've had to put up with attempts to sully the character of the League's best striker. This would not happen in any other country. Could you imagine the Spanish press going after Cristiano Ronaldo or Lionel Messi in the same way?
Newcastle's football the other night was pretty awful. Their only tactic in the second half was to hit ever longer, and ever higher, hoofed efforts up towards the excellent Demba Ba. It was like watching Stoke without the thuggish behaviour. Put together with the constant time-wasting of Tim Krul (which started after about ten minutes of the game) it made for a pretty ugly spectacle from our visitors. Putting all that together I would have to wonder why our press choose to find an angle that gets at Arsenal in some way. Again, it wouldn't happen with the Spanish press as they would choose to castigate the side that didn't come to play football.
Robin Van Persie and Krul were at each other from very early on. I got the distinct impression that there has been some kind of carry over there from the Dutch squad. The pair seemingly do not get on well at all. I read one report yesterday (was it that idiot Charlie Wyett in The Sun?) that said how Van Persie's main contribution after half-time was to moan about the time-wasting. Would it not have been better for the esteemed reporter to lament the time-wasting itself, and also Howard Webb's flat refusal to deal with it in any way. The fact that Krul was made to pay for it in the grand manner with Vermaelen's winning goal should have been the point made. Van Persie obviously wasn't slow in making this clear to Krul after the goal had been scored. I have no problem with him doing that whatsoever. It shows that he really wanted to win the game, and then wanted to make the point that it had got Newcastle nowhere. I remember well Tony Adams giving the two-finger salute at QPR when a late turnaround was made in the face of various donkey-chants and general abuse back in 1990. It showed that Tony cared, and that he wasn't about to let the opposition forget that Arsenal had won the game. If Krul then decided to run forty yards to confront RVP (as the TV replays showed) then that is a problem for him, not Van Persie. All Robin did was keep smiling at him. The rest of the nonsense occurred when Guttierez decided to lay hands on Van Persie (who'd have thought - an Argentinian trying to cause trouble on somebody else's turf).
As far as I am concerned the incident at the end of the game showed how Robin Van Persie is developing in to the role of Arsenal Captain. I want that sort of commitment and visible show of passion from whoever has that honoured position. In recent years it is something that has been seriously missing from the men leading our team. In Van Persie and Vermaelen we now have two proper leaders who, through their actions on Monday night, showed they are both fit to wear the armband at Arsenal Football Club. Anybody who disagrees with that clearly wasn't in the ground when TV5 stuck that winner away late on Monday night.
Posted by DvbrisG at Wednesday, March 14, 2012