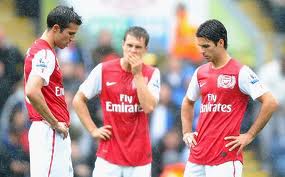 RVP with the sons of Ray Wilkins


The second-half of that game was a return to everything that was wrong at the Club over the past two years. After a first-half of utter dominance, punctuated by the usual refusal to put the ball in the net, and the now obligatory failure of a referee to award Arsenal a stone-wall penalty, we returned to the arrogance of old. Right from the kick-off of the second-half Arsenal never got started. I have no doubt that we will hear from Arsene that they were tired late in the game, but that would neglect the fact that Fulham have also played three times in a week. This is the same Fulham that were thrashed 5-0 last Monday by Manchester United. The weekend results had put us right in the chase. The results today have put us back outside the top four, and facing another uphill struggle.
Arsenal's biggest problem, for me, is the two idiots we have masquerading as attacking midfield players. I really don't buy this nonsense that Mikel Arteta is providing something we have been missing. The man is a midfield player (supposedly a creative one) who never plays a forward pass. He is joined by Aaron Ramsey, another "creative" ball player who always wants another touch, thus slowing down the play, and then playing it either square, backwards, or straight out of play for a throw-in. It's like watching two  latter-day Ray Wilkins poncing about in the middle of the pitch. Jack Wilshere's return can not come soon enough.
I have no doubt that numpties will be calling for Johan Djourou's blood following his sending off. The fact that the second yellow card came from something that wasn't a foul would be neither here nor there for these clowns. The same idiots will also refuse to blame Szczesny for some utterly abysmal goalkeeping which lead directly to the equaliser. He made a couple of good saves, but the error for the goal was unforgivable and, had it been Almunia or Fabianski, would have had the muppets that follow us up in arms.
Then we come to Tomas Rosicky and Sebastien Squillaci. Did Rosicky pass to anyone in a red shirt when he came on? The decision to leave Chamberlain out of the squad completely, while wasters like Rosicky and Arshavvin continue to get game-time marks a dereliction of duty by the Manager. How many other teams would have a Manager allowed to spend £10m+ on a player, and then never give the lad a game? Walcott was awful, and had to go off, but his potential replacements on the bench are nothing short of a disgrace. Squillaci, meanwhile, was a ridiculous substitution from Wenger. For some reason he seems to have turned his back on Ignasi Miquel, so we had this buffoon filling in at right-back after the red card. It was only a matter of time before he made his mistake, and it duly came in injury-time with a perfect header back across goal for Fulham's winner. Why is he still an Arsenal player?
As you might have guessed I am seriously annoyed as I write this. We had a real opportunity today, and they blew it. Disgraceful.
Posted by DvbrisG at Monday, January 02, 2012