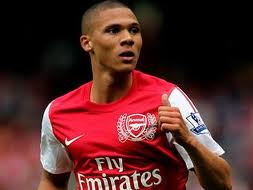 Kieran Gibbs: What is taking so long?


Francis Coquelin's hamstring injury on Monday night has done us no favours whatsoever. With so many full-backs (and people that could fill-in at full-back) out injured the last thing Arsenal needed was another one. It was also a big blow for Coquelin himself as he was really starting to establish himself as a member of the usual matchday 18. Being a player with the ability to play in a number of positions is a big advantage to such a youngster. He reminds a bit of Flamini or Grimandi, so I hope his mentality is more Gilles than Mathieu. To say his injury leaves us with some pretty threadbare options is an understatement. However, I have no problem whatsoever if it means Nico Yennaris getting a couple of games.
I have been able to see Yennaris on two occasions now for the first-team, and he has really done well. For a small guy he rarely loses an aerial tussle, and he is quick and strong. Yennaris doesn't lack for skill either, and looked far more dangerous going forward than Theo Walcott did when he came on against Leeds. I heard Arsene's interview after the game where he conveyed his hope that Djourou would be available for Sunday at Swansea. However, I would rather see the youngster playing at right-back than Djourou. I like Djourou, and I thought he was our best defender last season, but I have been impressed by Yennaris and would like him to get the sort of opportunity that Kerrea Gilbert got in 2006.
On the other side of the pitch we saw Ignasi Miquel put in another reasonable effort against Leeds, despite being a centre-back having to play out of position. The improvement in Miquel since his debut at Leyton Orient last season is massive. He looks bigger, quicker and stronger, and is a decent footballer. I think he learned a hell of a lot when he was forced in to the fray at home to Liverpool right at the start of this season, and he looks like he could have a future. However, I would much rather we brought in a proper left-back to play there. You can only go on so long hedgeing your bets like that. It will really not do to have Miquel playing up against Nani on Sunday week - the memories of Old Trafford and Armand Traore are still clear in the mind.
There can be no doubt that we have suffered a rotten run with regards to injury in the full-back positions. Andre Santos' injury could have been avoided as he simply shouldn't have been playing in the match in which he got injured, but most of the other injuries are just pure bad fortune. Having said that I have to wonder what the hell is going on with Kieran Gibbs. First of all he strained stomach muscles because, it seems, the medical staff hadn't picked up on a hernia. Having had an operation on his hernia I would question what the delay is to his return. Why is it taking him so long to get back to playing football? It now seems likely that Bacary Sagna will be back before Gibbs, despite having broken his leg!
There is no doubt that Arsene has a decision or two to make, and he needs to make them quickly. Reinforcements are required, preferably before the weekend. The Manager says he doesn't want to sign anybody on a permanent basis at left-back, but that might just be limiting his options a bit too far. Needs must, and if that means getting the cheque-book out then so be it. What would be wrong with signing Leighton Baines? So what if it means you have to sell one of Santos or Gibbs in the Summer? If the person you're bringing in is a better player then it's tough luck on the one who pays the price, but that's football.
I said how we have had bad luck with these injuries, and to lose all four full-backs, and then those that are able to cover as well, has little to do with a lack of squad depth. In fact, we are far less well equipped in other areas. But I feel it is important to now make our own luck a little bit. It might cost a couple of million or more, but get it done.
Posted by DvbrisG at Wednesday, January 11, 2012