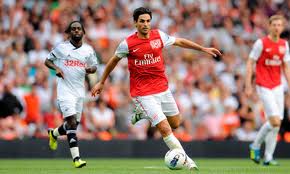 Mikel Arteta - due a performance?

Last time West Brom came to visit us it marked one of the genuine low points of Arsene Wenger's tenure. We found ourselves 3-0 down at home to a promoted team, who were being driven forward by a former Arsenal trainee, until Samir Nasri launched a one-man rescue mission and nearly succeeded. I hope I am not speaking far too soon but the complacency and arrogance of the team we were watching last Autumn seems a far cry from the unit we have today. If there was a positive to be taken from the defeats at Old Trafford and Ewood Park it was surely that this mob can never think they are too good. I honestly believe that there is a genuine team spirit in the current squad, never more prevalent than in the post-match celebrations last Saturday at Chelsea.
For once the injury news ahead of the game seems to be bad for the opposition, rather than for us. I was not upset to find out that Paul Scharner will be missing for West Brom, and that Peter Odemwingie is also struggling. Shane Long, of course, is out for a while after that horrendous tackle from Alan Hutton at Aston Villa a couple of weeks back. That is three of the Baggies' most dangerous players likely to be missing, which should be good news for Arsenal. I am a big fan of Scharner. He is the sort of player I would have liked to see join Arsenal as a squad man. He's a bit of a Gilles Grimandi type of player, who can cover a number of positions and is not afraid to put in a hefty tackle. The fact that he is absent tomorrow means that West Brom will, at least, be a little less threatening at set-pieces - with our record that is very important.
Robin Van Persie will return to the starting eleven tomorrow in place of Ju Young Park. I don't think Park did anything wrong the other night, and he worked his socks off. If, by some chance, we can get a couple of goals ahead tomorrow I would like to see him get at least twenty minutes under his belt in the Premier League. Similarly I would like to see him brought on to join Van Persie if we are struggling and need to score - he is, after all, a centre-forward. With Marouane Chamakh out with a knee injury (or so we are being told) there will hopefully be a chance for the Korean to prove to us all that he was not signed simply to boost shirt sales.
Elsewhere there might be one or two other changes to the team. I can see Koscielny coming back in for either Vermaelen or Mertesacker. There could also be a change in midfield with Rosicky getting a game, but who would he replace? Aaron Ramsey has played a lot of games, and a rest ahead of having to play for Wales may not go amiss. Arsene seems to have been determined to keep Mikel Arteta in the side, but quite a few fans are unconvinced by the Spaniard. I think we all knew he wasn't going to be a replacement for Fabregas, but perhaps a little more impact was expected. It is worth noting that Arteta is playing in Jack Wilshere's position, alongside Alex Song, rather than at the front of the midfield. This is, in my view, restricting his influence. There is a concern that he lacks pace, and his eye for a pass takes longer to focus than we might expect from an Arsenal midfield flair player. However, my big problem with Arteta is his tendency to look sideways all the time. You might recall I had a pop at Ramsey about this before the Spurs game (less in evidence recently), and Denilson got all sorts of stick for it. The more you see it the more you think it is done under instruction. The point is that Arteta is an attacking midfield player and should be allowed to play as such. I believe he is yet another victim, like Arshavin and Walcott, of Wenger's tendency to play people away from their best position. On his debut Arteta spent twenty minutes ripping Swansea apart in tandem with Van Persie and Arshavin. He then got moved deeper by the Manager, and has rarely been seen in attacking areas since. Arteta needs a performance, and there's no time like the present.


I can't go to the game tomorrow thanks to work. My six year-old, who broke his arm on Wednesday, is taking my place and will be attending in plaster and sling. I hope the boys give him plenty to shout about and a few goals to celebrate. A win is vital ahead of the two week break for yet another round of internationals.
Posted by DvbrisG at Friday, November 04, 2011