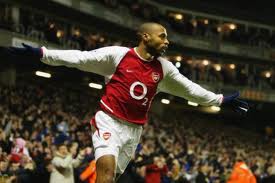 Thierry - did last night move him closer to a return?


I won't so much review last night's game as comment on a couple of things which we might have learnt from it. It was, obviously, disappointing to get beaten. We've lost out on the chance of winning another trophy, and another trip to Wembley. That we lost by just the one goal against a team which cost so much to assemble is maybe a testament to those on the pitch, and also shows me that we are stronger in the depth of our squad than most of us anticipated.
The main thing that seems to have struck people following the match is that we really do not have any serious options in attack beyond Robin Van Persie. I had really hoped that Chamakh would rediscover the form he had before Christmas last season. Sadly it seems that he is a busted flush as far as his Arsenal career is concerned. His play with his back to goal is still good. However, a centre-forward must be judged by his goals, and Chamakh has only two of them in 2011. Regardless of the fact that he has not had too many opportunities to start games, that is clearly not enough. I've liked Chamakh since he arrived. He tries hard, and never gives less than 100% effort. Unfortunately that is not enough right now. As for his strike partner last night I seriously have to wonder why he was signed by Arsenal. We are in to December as of tomorrow and Park has yet to play a single minute in the Premier League. He has only made the bench on a couple of occasions, when Chamakh was injured. Even when the boys were 3-0 up over West Brom with twenty minutes left, the Manager still did not turn to his Korean striker for a run-out. It seems more obvious than ever now that reinforcements are required in January. Even if Robin Van Persie can continue his form, it is impossible for him to play all the time. We need a player who is capable of coming in and either creating or scoring goals. If that player is not available on the transfer market then Arsene Wenger must bring Thierry Henry back on loan for as long as possible. Theo Walcott can also move through the middle, but he would require someone to play alongside him (though such a move would surely mean Alex Oxlade-Chamberlain getting some deserved game time).
I was pleased with the strength of the team Arsene picked last night and, perhaps more importantly, the presence of some senior players on the bench. There was enough there to try and change a few things as the game went on. Having said that, among those substitutes was Andrey Arshavin. I know he only came on with a few minutes left, but the lack of effort shown by the Russian (yet again) is now becoming more and more galling. Arshavin is paid a lot of money to wear the Arsenal shirt. It is not too much to ask, surely, for the sort of work-ethic he appeared to show on the pitch when he first arrived at the Club. Elsewhere we saw signs that there is life in people like Sebastien Squillaci, and all credit to the man for his professionalism - Arshavin could learn a lot from a man like Squillaci.
The midfield duo of Frimpong and Coquelin have impressed us all once again. The energy of the pair is incredible. They don't stop running and both have matured immensely on the pitch these past few months. I firmly believe that the upturn in the form of Alex Song is down to the progress made by the two youngsters, and the fact that they have provided much needed competition to his position in the team. When the only "alternative" was Denilson it was easy for Song. Not so now. Frimpong is also the sort of guy who will get fans on his side for the fact that he plays the way we would if we were on the pitch - even down to having his say with Nasri. At the end of the game Nasri was clearly unable to deal with Frimpong and then, it is reported, ran away from him after taking a swing in the tunnel. I think I know who would have come out on top had Nasri actually stood his ground rather than wimping out and high-tailing it to the dressing room. Rumours that Frimpong was wearing a shirt which said "BENCH" under his Arsenal strip are not true, but were they so then young Emmanuel would have been a cult figure already (David Seaman, on Twitter, had actually already announced Frimpong as a legend when he heard the story earlier today).
The one other thing I want to comment on is the choice of Captain last night. I like Benayoun a lot. But, he is not an Arsenal player. He is on loan from Chelsea, which makes him a Chelsea player. On the pitch last night were Lukasz Fabianski, Sebastien Squillaci and Johan Djourou, who have all been Captain of Arsenal in the past. Why was one of them not selected to lead the team? I find this incredibly disappointing and it is a further insult to those that have worn the armband with distinction.
So another Carling Cup adventure is over. I enjoy it every year and, sometime or another, we're going to get our hands on that trophy. It now won't be this season, however, so the FA Cup takes on extra importance in my view. We have to win something, and it has to be soon.


The blog may become a bit sporadic over the next fortnight. We are moving house on Friday morning and my broadband provider will not be setting up the connection until 13th December. I will be endeavouring to write as much as possible from using wireless connections elsewhere, but this might not be possible as often as I would like. I will write something tomorrow, but that will probably be the last until Sunday morning at the earliest - the business of the move will mean my wife might frown upon me wasting time writing about Arsenal (she doesn't understand, does she?)
Posted by DvbrisG at Wednesday, November 30, 2011