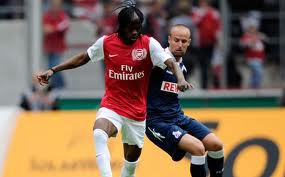 Gervinho - due a goal or two

I'll keep this fairly brief, if I may. I've had about an hour of sleep since finishing work at 8 o'clock this morning, so I'm feeling a little bit knackered.

I'm a bit disappointed that I didn't have the time to write a review of the Dortmund game as there was so much to say about a wonderful evening of football. If I can summarise I would firstly pay tribute to the incredible travelling support of the Germans. I had to walk down Aubert Park in among them as they were escorted to the ground past Highbury. They were loud and colourful but, largely, very friendly. It felt like being in amongst an English crowd with the amount of drunks and the peeing against walls, but there was certainly very little malice present in their ranks. The other thing I would say about the night is that, after the first thirty minutes Arsenal were outstanding and played as well they have in quite some time. Alex Song recovered from a shocking start to the game to turn in a man of the match display, capped by that incredible run and cross for the first goal. To beat the German Champions quite so comfortably (2-1 was not a reflection of the play) was very gratifying indeed. Having the group wrapped up already is something nobody could have envisaged before the first game in Dortmund (or even after it, such was the hiding we got in a 1-1 draw). I think a very weak team will now travel to Greece for the final match, and rightly so on this occasion.


On to tomorrow and the quest for Premier League redemption continues. I can see one or two possible changes. Koscielny was replaced with fatigue on Wednesday night, so Arsene might look to start him on the bench tomorrow (this would also possibly make him available for Man City on Tuesday). Elsewhere I can see some midfield rotation, though as for who will miss out I wouldn't like to guess. I thought Aaron Ramsey was outstanding against Dortmund, but a rest might do him some good with Diaby getting a possible start (or maybe even Rosicky if fit). I wouldn't be surprised to see Gervinho left out tomorrow, though I would not be in favour of dropping the Ivorian. He seems to be seriously lacking in confidence in front of goal, which is bizarre considering the rest of his game. He certainly needs to put some chances away, or the crowd will begin to get at him, and we don't want that at all. The law of averages says he must score one or two eventually and at least he is still getting in the position to score, even if he is not managing to apply the finishing touch.
Fulham have problems of their own tomorrow with injuries, which should aid Arsenal's cause. At the start of the season I tipped them for good things. I felt their UEFA qualifiers could see them get off to a flier this season, before fading late on. As it has turned out they have struggled from the off in the League. They have decent forwards in Andy Johnson and Clint Dempsey, but I would seriously annoyed if our defenders got turned over tomorrow by Bobby Zamora. Elsewhere they have the giant Hangeland who I would expect to struggle against the skill of a man like Van Persie, or the pace of Theo Walcott. They also have Philippe Senderos. Big Phil was harshly done to by Arsenal. When given a run in the side he showed he could play with real quality. His confidence was eventually undermined by the Manager and the way he used him in the side. I hope Senderos doesn't come back to haunt us tomorrow.


That will do for today. I'm off to bed. More tomorrow night, when I get home from the game.
Posted by DvbrisG at Friday, November 25, 2011