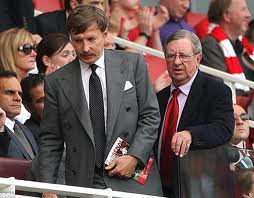 We've been crying out for Stan Kroenke to let us know what his intentions might be following his takeover at Arsenal Football Club. Today we've woken up to newspapers full of his views on the way the Club is being run. The headlines have largely been grabbed by Mr Kroenke's observations on the way the Glazer family is running Manchester United. The way he extols the virtues of their method of ownership will be worrying for many Gooners. It is not too long a hop from admiring the ways of others to copying them. However, the main part of what Kroenke has had to say is more about the way Arsenal do their business. It seems, having read his interview in full, that Stan wants to keep the status quo at our Club. He is all for the current business model. Yes, this way of doing things has faults, and the lack of investment in the squad is more than frustrating to most of us, but I would far rather stick with our way of doing it than go down the route of leveraged debt founded against the name of Arsenal. Kroenke is keen, in his interview, to underline the perils of being funded by a single investor, as Chelsea are. He uses examples of numerous American sports enterprises that have fallen by the wayside as a result of such investment, and the fact that the whim of one man (or, indeed, the stock market) could irreparably damage the fabric of the Club. One line is key in all of this, and that is that Stan Kroenke has never yet taken money out of his sporting interests. There remains a very real concern that his role at Arsenal is an "investment" and that implies that he would want to turn a profit for himself at some stage. Time will tell.
It seems throughout the interview that Stan is a huge admirer of Arsene Wenger. He goes to great lengths to talk about the Manager and how he is quite the best man to be in charge at Arsenal. It may not be what some wanted to hear (me included to a certain extent) but it is quite unequivocal, and such stability is important. The players know that the Manager is very much the man being backed by the owner. Kroenke addressed the players after training yesterday, in the presence of Arsene Wenger, so they are fully aware now of what will be expected of them. Kroenke was at Chelsea on Saturday and I'm sure he will have been impressed by the togetherness of this group and the way the fans backed them and responded to them.
I have never been in favour of one man owning too much of Arsenal. However, if it was going to happen, and it was a choice between Kroenke and Usmanov, I would have chosen the American. The soundbites he has finally given us do not have me changing my mind (though the start to the season seriously had me wavering). Hopefully we are in good hands.


I was working yesterday evening and got home quite late. As usual I put Sky Sports News on and went straight to the Arsenal page on SkyText. I couldn't help but chuckle when I read that Rafael Van Der Vaart has fallen in to the trap of so many Tottenham employees of the past twenty years. He says Spurs "are better than Arsenal." Add him to the list of Anderton, Sherwood, Hoddle, Jol, Keane and co. As a result of this outburst I am now confident that Arsenal will finish above Spurs this season. Whenever they get on a (rare) good run of results we hear the mugs coming out with statements about how they are stronger than Arsenal (or similar) and that this could be their year etc etc etc. They never learn. It always comes back to bite them. It is 1st November today, and the idiots from the Lane are doing their crowing. It never ceases to amaze me. Let's wait until May before we do any of our own.


It's back to the Champions League tonight and another tough game against Marseille. I have read that Arsene is planning a number of changes to the side for this evening. This concerns me. A win tonight puts us through. In my view it is far better to do all we can to secure that qualification at the earliest opportunity. We are on a really good run right now, and disrupting that by playing a team that might come up short is a risk not worth taking. I can see the merits of resting Robin Van Persie on the bench again, but I would rather see him get that break on Saturday (or even with the game put to bed early tonight when he could be taken off).
I fully expect Thomas Vermaelen to come in tonight in place of Mertesacker. The German has done just fine, for me, but his mistakes on Saturday perhaps betray a little fatigue since he has played almost every game since joining Arsenal. Mertesacker being replaced by Vermaelen is not going to weaken us in any way. Carl Jenkinson should also come back in for Johan Djourou at right-back.
The newspapers are indicating that Yossi Benayoun will come in tonight, and that would be fine by me, as his work rate is important. However, we also look likely to see Rosicky and Arshavin replacing Walcott and Gervinho. This is too much change in my opinion. Why interrupt the rythm of players when they are showing some form?
Marseille will be stronger tonight than they were two weeks ago. One of the features of the game in France was that they failed to trouble Arsenal at any point. I can't see that happening twice. I know they have been struggling domestically, but they are still the side that beat Borrussia Dortmund 3-0. Make no mistake, Marseille have quality players in their ranks. If Loic Remy can get some service up front then he has the ability to do some damage. Tonight is not a time for complacency to set in. Arsenal must concentrate and keep working hard.


I'll try and get a match review written before work tomorrow, but time may overtake me in that regard.